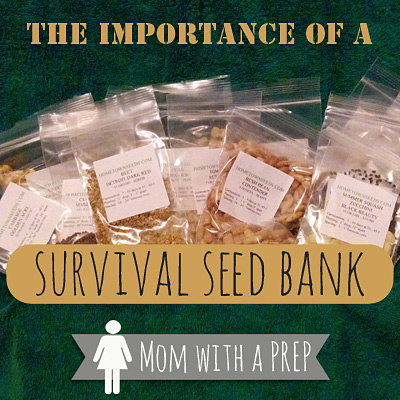 It’s winter time…when most folks aren’t even beginning to think about the garden, unless, of course, they are PREPared 🙂 This is the prefect time to be planning and ordering and beginning your wee plants, in preparation for the great garden adventure to come!

Not All Seeds Are The Same

If you’re one who tends to order seeds in December/January/February or stands in front of the seed display at your local DIY store in March/April, you might need to start

Thinking About The Future

Consider a day when you might NOT be able to get the seeds you really need, and your crops haven’t produced a sufficient supply of seeds to plant for the next year or your seed saving from your plants didn’t go as expected and didn’t survive. What will you do for a garden then? We all know that gardening needs to be a preparedness skill we are developing right now, not something that we wait until a need arises to begin, but what about planning for the future where you might need more?

Survival seed banks, like this one from Hometown Seeds, are seed collection that you can store (I store them in the freezer), and have ready for a time when you might need them. Seeds can be stored for years, so these aren’t necessarily ones that you’ll use this gardening season, but save for gardening seasons to come.

Here is what my Hometown Seeds Survival Package came with:

You can add to the seed selection by ordering more seeds from them and putting into the package when it arrives. It comes in a triple sealed mylar bag (which is awesome for long-term storage). Once opened, we just throw in a silicone gel package to help deal with moisture, then seal up tightly.

This is why I love having the survival seed bundle – it was already done for me – and all I had to do was throw it in the freezer. Because I’m using it as insurance for our family’s food future, this made it a super convenience for me. Sure, there are other veg that I’ll add to it to broaden the selection, but I have some assurance now that I have these seeds right here, right now, ready to go. And as we grow a larger garden, we can rotate through what is in our seed storage and store for the following year!

I’m not telling you that you can’t use hybrid seeds. Hybrid (as long as they aren’t also GMO) are great short-term alternatives, especially if there is a variety that does particularly well in your zone, or produces the kinds of fruit or vegetable that you need for your circumstances. But don’t count on those seeds being able to sustain your family generation after generation. I’d still prefer to always use heirloom whenever possible.

Currently, Hometown Seeds is offering the Survival Seed Bundle for 40% off, but they’ve provided a coupon exclusively for my readers for an extra 10% off that price!