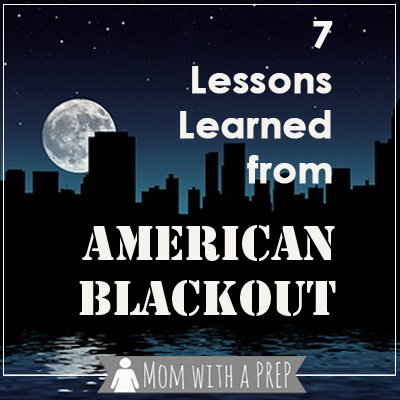 We finally had the opportunity to sit and watch National Geographic’s American Blackout last night. The premise is a cyber-attack on the national power grid happens, and America is without power for more than a day. Here are some lessons learned from it:

Be Prepared with Cash

In our story, 2 of the families experienced a problem with money. The NYC couple couldn’t buy the basic necessities 3 days into the event, and the San Diego couple couldn’t pick up cash from the ATM for quick necessities for the new baby that was coming.

In the event of a grid-down situation, whether it’s from a localized emergency or a long-term emergency, odds are that electronics aren’t going to work correctly. In many cases, electricity goes down for a time period and things don’t work. Whether it’s the ATM, a cash register that is tied to a computer, or the grocery store shutting down for safety, having cash can mean you get to purchase something because the transaction can be completed – even if it’s just a store employee writing it down and taking the cash to process the transaction later. In the show, a NYC couple couldn’t purchase the basic necessities because they didn’t have cash, and a father couldn’t get cash from the ATM to pick up some necessities on the way home. Those are times when having emergency cash in your wallet and some located in your get home gear in your car will be helpful.

Be Prepared with Food & Water

Will you be snowed in for 3-5 days with a major storm? Will your city be devastated with a large tornado, or your region with a massive hurricane? Will you experience a large earthquake or volcano eruption? Will there be an explosion from a railway car near you and you are unable to travel the city streets for awhile? Will you be evacuated because of a firestorm? Will your family be stricken by a virus that keeps you down for 2-3 days?

Here’s the deal. Can you survive for two weeks in your home without water services, sewer services or having to visit the grocery store for basic food needs. What about just 3 days? Even in the most basic of localized emergencies, being able to have food and water and other necessities for your family for a small period of time should be a goal. You don’t even have to focus on the larger scale of a national emergency…start small, where it’s most likely to happen.

Having food and water to last is one of the most basic things you should prepare for. In most instances of the American Blackout story lines, people at home might have been perfectly fine had they had food and water stored. The teen in Austin wouldn’t be roaming the streets looking for food (though trying to find his mom seems reasonable), the NYC couple wouldn’t have had to venture out to steal food, the baby couple wouldn’t have had to worry about the Dad leaving to find food, the neighbor of the Bugged-Out Prepper wouldn’t have come begging for food.

Be Prepared with Medical Knowledge

Basic first aid knowledge for medical issues is an incredible skill to have, not only in a mass emergency situation, but even one that can help save a life at a restaurant. Knowing how to treat minor wounds, knowing basic life-saving procedures, and having medical supplies (or a knowledge of how to use everyday objects in medical ways) may just save a life – even yours.

Be Prepared with Defense

The NYC couple found themselves in a few issues where personal defense would’ve been helpful. Not only might they have been able to better defend against an attacker, they would’ve known more about how to defend themselves within their home, and fortify their doors from attack, and what not to do to draw attention to themselves. Situational awareness, the idea that you are aware of the dangers around you at any moment, might have helped the Bugged-Out Prepper’s pre-teen son not be captured by the neighbor (talking to yourself when you’re supposed to be on guard duty isn’t the safest idea), it might have helped the Austin teen better escape the folks chasing him had he known where he was and kept himself quiet.

Do you have a weapon you KNOW how to use that you can defend your home and family with? The Austin teen found a gun, but obviously didn’t know how to use it as he was so unsafe handling it. The Baby Couple Dad knew to take something with him, even if it was a baseball bat, to defend himself when he went to look for food. Have you taken a self-defense class or learned a martial art that will help defend you?

Be Prepared with a Plan

You can’t spend your life thinking about all the ways something can go wrong in life and plan for it – you’re no longer living at that point. But there are basic things that happen often in people’s lives that they don’t plan for. Any number of emergency situations are easy to talk through and plan for. Make a plan for your family so that you’ll know what to do, and will most likely know what they’d do in a situation.

And once you have a plan, practice it. Often.

Be Prepared with Stuff

In many of the story lines of the show, the shear lack of food and water and equipment caused problems for everyone. The college crew locked in the elevator didn’t have food or water to sustain them a day, many of the stories didn’t have basic first aid equipment to help out with even the minor things, and the related story lines would have caught so many out and away from home.

This is where an Everyday Carry philosophy comes into play. Whether it’s an emergency car kit, a Get Home bag, a well stocked diaper bag, a Day Bag, or a Bug Out Bag that you keep with you, having access to food, water, basic medical supplies and needs is something you should never be without. If even one of the College crew had a bag with them, they might’ve had more food and water to sustain themselves in the elevator instead of dehydrating and starving. And maybe having something better than a souped up Swiss Army knife might have aided in their escape. If the Baby couple had one, they would’ve had some basic first aid things for the birth of their baby away from the hospital.

Look at the Bugged Out Prepper – they had planned for this and had everything they needed for awhile. Not that you need to prepare that hard for a most-likely scenario for yourself, but the idea is to think ahead about what you might need and get it. Do you need an underground bunker? That’s up to you, but having some extra gear to help save your life – I think it’s worth it.

Be Prepared with Knowledge

Watching the show, people made mistakes left and right. You’re stressed, you’re hungry, you’re scared, you’re dehydrated, you’re going to make some bad decisions. But having knowledge about basic survival skills would’ve helped in many of these situations before things went bad. It will also help you in your decision making processes to know that sending your 11 year old out to do night watch on your property, opening a tin can with a chef’s knife, leaving candles burning in a child’s room or exposing yourself to looters, aren’t necessarily the best choices to make.

Having a plan and practicing it also helps with that knowledge – because even in a panic-striken state, your brain will have already been trained on the things that you need to do, versus the things your freak out mode tell you to do.

Some things not learned from the show were more ways people did to get by, how they managed sewage, how they figured out how to use the food they had to stretch (though the neighborhood bbq was a really great idea for all the food that was going to spoil), and how a neighborhood came together to survive. Yes, there will be riots – huge ones. Yes, people will die at the hands of others. Yes, people will end up in FEMA camps (and they are good and bad all at the same time). But it would’ve been good to see a group of people come together and show how they did it well, despite their circumstances and despite not being overly prepared. The Baby Couple’s neighborhood would’ve been a great example of how it could have happened.

What did we come away with? Knowledge that even in a smaller emergency, we’re not prepared enough, and we need to do more, learn more skills and practice the skills we do have more often. Does that mean we need to go out and buy a bunch of stuff with money we don’t have? Nope – though we could sell of things we no longer use to gain money to do that. But we must always strive to be learning more, to be doing more to help ourselves and others.

If you want to see the full edition, check the video websites. It’s pretty easy to find!

Did you come away with any new found knowledge from the show? What were your thoughts? 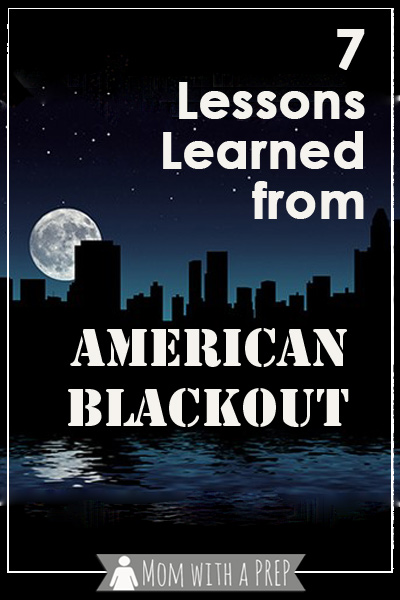