You are here: Home / Library / A Kinder, Gentler Side of Prepper Fiction 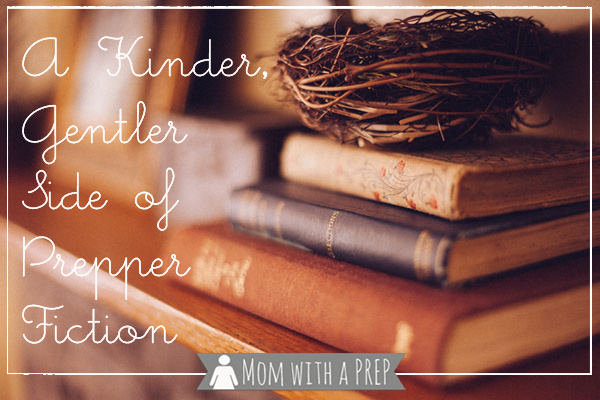 Can you really imagine that there could be a kinder, gentler side to any storyline that starts off that the world, as we know it, has just ended and that thousands if not millions are about to die horrible deaths, and that there is never going to be any more toilet paper, ever?

Historically,  PAW (post-apocalyptic world) fiction has been the men’s domain, written by men, for men, about guns and fighting and machines and manly stuff and what a value a good little woman in the kitchen is, with bonus points if she’s a crack shot. It’s a bit different than general dystopian literature because it falls into a sudden catastrophic disaster-type end of world scenario more than a general change in society.

I’ve read a lot of PAW fiction and have enjoyed most of them, even though I cringe mightily at how little women are really valued in some of them. But there are also the PAW fiction books that are amazing, cover the same subjects and don’t make me feel like a fourth class citizen because I happen to have hips that were made to birth babies.

There is a new wave of prepper fiction coming out that is a kinder, gentler version…and it might be able to bridge the gap of those that are so turned off by the talk of guns and OPSEC and LPOP’s and manly men kind of talk and would like something more story-driven than action driven.

Don’t get me wrong, I love me a good action driven story, but I have a really hard time getting past the tactical enough to overlook the really bad women characters to be able to enjoy so many stories that are out there. Don’t assume that I want rainbow unicorns and prepper heaven where everyone lives happily ever after once the dust settles. I love the tactical interplay and learning the military theories, but I know that there is a market out there looking for the story, looking for the ideas, and looking for something that is less driven by testosterone.

While there are a ton of post apocalyptic stories, I’m going to focus more on the ‘prepper’ side of it. Ones not necessarily living in a PAW world and that’s the norm, but those who have lived through the change and have had to survive the other side.

Parable of the Sower Series by Octavia Butler
Not only can this lady write, she writes across the board in Science Fiction. This dystopian tale of starting over has so many of the same characteristics of the prepper lifestyle. “Lauren Olamina is an 18-year-old woman with hyperempathy syndrome–if she sees another in pain, she feels their pain as acutely as if it were real. When her relatively safe neighborhood enclave is inevitably destroyed, along with her family and dreams for the future, Lauren grabs a backpack full of supplies and begins a journey north, to begin a life anew.” Instead of just being about the general change in society, much is written about how to survive the day to day issues like growing food, etc.

Into the Forest by Jean Hagland
I read this book a few years ago, and really, really liked it. “Over 30 miles from the nearest town, and several miles away from their nearest neighbor, Nell and Eva struggle to survive as society begins to decay and collapse around them. No single event precedes society’s fall. There is talk of a war overseas and upheaval in Congress, but it still comes as a shock when the electricity runs out and gas is nowhere to be found. The sisters consume the resources left in the house, waiting for the power to return. Their arrival into adulthood, however, forces them to reexamine their place in the world and their relationship to the land and each other.”

Bugging Out to Nowhere by Paylie Roberts (I have not read this)
During the height of economic collapse in the US, Rachel and Tom flee for the countryside a day too late. With the comforts of city life unlikely to be seen again, they are determined to survive on their own out in the middle of nowhere. But all too quickly they realize they must collaborate with friends and foes alike, as energy runs out and resources become scarce. Despite years of prepping for such an event, to survive they must learn to endure tremendous hardship, cope with unwelcome guests, and face nature head on. Their new life not what they anticipated, Rachel and Tom discover that no amount of preparedness could make them ready for what lie ahead. They must foster revolutionary ideas to rebuild what they once knew.

Susan Gregersen – writes a bunch of different prepping books, some fiction and some non-ficiton. They often show up on the free Kindle selection, so look for the short-fiction she writes. I’ve read a Tale of Two Preppers about a couple who is caught in the city before they can fully realize their preparedness, and have to make their way to safety after the collapse. (Those of you familiar with PAW fiction might also know her as GypsySue on forums).

Alpha Farm: Prepper Chicks Series by Annie Beardel — In Alpha Farm, you get a mix of a woman’s side of a male dominated world, but from a powerful woman’s point of view. It’s not the kinder, gentler version of life after a collapse, and it’s definitely rated R, but it’s also not full of the kinds of  viewpoints so many of the male written books can be. The chicks are powerful and a force to deal with, even if they do take a less dominant role in a relationship. But watch out for some of these girls as they learn their true power. You can read my full review here.

Aftermath: A Story of Survival (The Jimmy Walker Series) : LeAnn Edmondson from HomesteadDreamer.com has written a bit of a twist – a story written by a woman but with a male central character. Jimmy Walker finds himself becoming the leader of a group of survivors of the ‘end of the world as we knew it’ and at odds with both the government and a rogue nasty group planning to take over. It’s got a lot of survival/preparedness mixed in the story line, and how coming together as a group can be beneficial to people instead of becoming loners. There’s still shoot outs, there’s a bit of a love story, and a lot of heart! Check it out!

Jacqueline Druga – Check out my review of Jackie Druga’s Last Woman – I might have just found you a new writer to follow!

Theresa Shaver – The Stranded Series – a review of her series coming soon!
Kathy in FL – the profile links up her stories that she has created on blogs
Megan Ralston – Preppers
Kelli Otting – Liberty Dying series
Cheryl Cholley – Survivalist by Circumstance
Sheri Dixon – American Evolution – prepping without the guns

If you like a little romance with your prep...

Bystander & Christmas in Bystander by Carol Evans
I read Bystander last year and enjoyed it. The tale of a woman who moves to a small town, buys some land, creates a sustainable life & business for herself (just in case), meets the man of her dreams, and then all hell breaks loose 🙂

Love in One Night by Rebecca Royce
I haven’t read this book, but found it intriguing that B&N had it listed as Prepper Fiction! Here is the synopsis: Melanie is a woman prepared for disaster. If the world as she knows it were to come grinding to a disastrous halt, her sustainable living community will be ready and able to take care of the people in their area. She doesn’t have a man in her life anymore, but she has her daughter and that’s enough.

Life as We Knew It Series by Susan Pfeffer
“High school sophomore Miranda’s disbelief turns to fear in a split second when an asteroid knocks the moon closer to Earth, the way “one marble hits another.” The result is catastrophic. How can her family prepare for the future when worldwide tsunamis are wiping out the coasts, earthquakes are rocking the continents, and volcanic ash is blocking out the sun? As August turns dark and wintry in northeastern Pennsylvania, Miranda, her two brothers, and their mother retreat to the unexpected safe haven of their sunroom, where they subsist on stockpiled food and limited water in the warmth of a wood-burning stove.”

State of Emergency by Summer Lane
“Cassidy Hart is your typical High School graduate: A little shy, a little sarcastic, and a little naive. But when an electromagnetic pulse takes down the United States, she’s forced to kick into full survival mode when she gets separated from her father.”

There are great stories of homesteading and poverty living that are well established reads. I wanted to concentrate more on specific “prepper” related works of art written by women. Not all are so kind and gentle that you don’t experience pain and suffering, death an anguish, but it is done on a different scale than what prepper fiction has historically been (though I have to say there are quite a few great books out now that are definitely along these lines – One Second After, Going Home, Lights Out, The Last Pilgrim – even though they are written by stinky boys!)

There are SO many more out there if you just go and search!

Do you have any recommendations of women’s prepper & post-apocalyptic fiction that you love? Be sure to check the comments for other recommendations!

Try it Before You Buy It: How to Read Preparedness Books for Free