You are here: Home / Preparedness / Why You Should Consider a Firearm

I’m excited to have Tom Russell, of the American Firearms Academy guesting on the blog today. 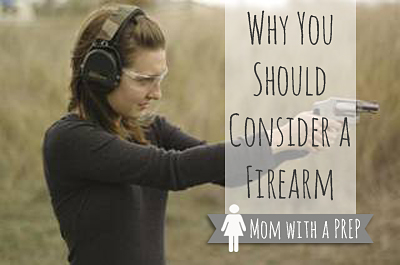 We are CHL holders, we teach our children how to shoot safely, and we take classes and practice often to make sure we know how to use our firearms safely. We feel it is important to have this tool in our PREPared ‘tool bag’ for your safety as well as the safety of your family. I know that many of you like the fact that I’m not a guns & ammo kind of blog, and I promise I won’t be sharing reviews of the latest AR or become an advocate for the NRA. But I do think it’s something important for you to carefully consider. Tom shares his thoughts here…

The Firearm as a Tool by Tom Russell

If we think objectively we will realize the firearm is simply another tool with which we secure our enjoyment, our meat, and our security.  Firearms possess no will of their own and are therefore subject to the will of their owners.  They are no more good or evil than a hammer, a nail, a car, or a pencil.  Are they powerful when misused?  Yes they are and just as powerful when used properly.  Considering the fact that 99 out of 100 of our fellow citizens are good people we would expect that firearms use in our nation is predominantly good, and it is.

Statistics prove conclusively that firearms are used safely and lawfully the vast majority of time.  According to Dr. Gary Kleck (Professor of Criminology, Univ. of Florida) handguns alone are used 2.5 million times a year by law-abiding citizens in lawful acts of self-defense.  In the vast majority of instances no shots are fired, no lives are lost, and criminal assault is prevented.  We don’t have to imagine what the outcome would have been if these law-abiding “would be victims” had not possessed the most effective tool available to defend themselves?  Successful violent crime would be 2.5 million incidents greater than it is.  It is lawful to use a handgun to threaten or stop another person only when faced with the threat of deadly force.  Therefore, we can safely conclude that most of these 2.5 million individuals would have become tragic data points in every increasing violent crime statistics.  Thankfully, because they were armed they were able to resist the evil and then carry on with their lives.  What would have been tragedy became something far less.

Having served as a Master Firearms Instructor for well over a decade, I have trained a great many responsible individuals in the effective use of firearms.  Without exception, every student has left my range feeling better prepared to deal with violent uncertainty than when they arrived.  Their confidence is justified by two things, power and skill.

With a five shot .38 Special, and the knowledge and mindset to use it, a 100 pound woman is stronger than a 250 pound man full of viciousness.

Don’t misunderstand, I’m not advocating the .38 as the ideal defensive handgun.  My point is that even with this small revolver she possesses tremendous power over anyone attempting to abuse her or her loved ones.  This ability is hers if she has the gun, along with the skill and mindset to use it.  Without them she is certainly lost.

You don’t have to be “into guns” to appreciate their value as tools, however, I’ve never had a student on the range that didn’t enjoy the shooting experience.  Granted, the instructional techniques I use are a layered approach and my students never fire a shot that they’re unprepared for which results in success and satisfaction.  Additionally, my students never fire a weapon they cannot effectively control.  As result the experience is always positive, as it should be.

Individuals are usually resistant to owning a gun for one or more of the following reasons:

If you’re reading this you are sensitive to the fact that we are facing everything from the consequences of fiscal insanity to the wrath of God.  In light of this I would strongly encourage you to acquire the faith, the skills, and the tools to keep yourself and your family safe, so far as is possible.

About the Author – Tom Russell is the owner and CEO of the American Firearms Academy of Dallas, Texas. (www.americanfirearmsacademy.com)  Tom is a former Marine, a minister for over thirty years, and was certified as a Master Firearms Instructor by Lt. Colonel Jeff Cooper in 2000.  He trains group classes, as well as private instruction in defensive pistol, shotgun, and rifle.

My final thoughts. Again, I’m not advocating that you gear up with enough guns and ammo to beat a third world nation. But I do advocate you having a weapon, being fully trained with it, practice often, and observe all safety guidelines when using and storing your firearms.

•VOTE for Mom with a PREP as one of your favorite Preparedness Websites!•

This work is copyright @2014 by Mom with a Prep {blog} and may not be copied in part or in whole without the express consent from Mom with a Prep. This post may contain affiliate links. Shopping through these links helps support  the efforts of Mom with a Prep.com and our family. We appreciate  you so much!