You are here: Home / Preparedness / Do You Have an Escape Plan?

If your town had a mandatory evacuation for a man made or natural disaster, do you have  a plan in place on how you would safely move your family out? 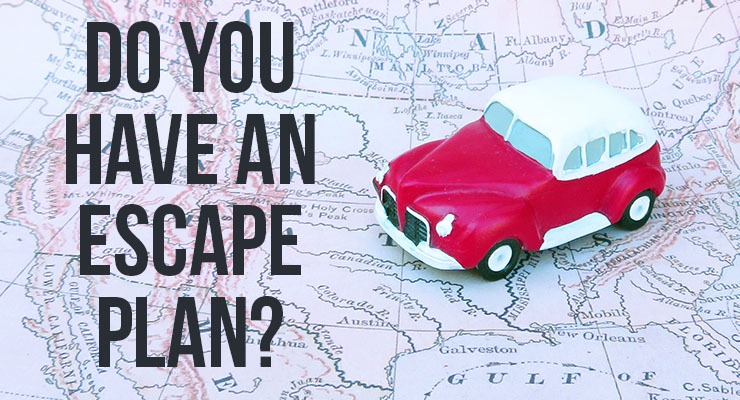 Do you remember the fertilizer plant explosion in West, Texas a few years ago? What started out as a chemical fire has rocked the world of this small Central Texas community.

One of the things that struck me as I was watching the local news coverage  was that as they were calling for a city-wide evacuation of the area, there was no where to go. West sits right on the edge of I-35, the major North/South route through Texas. The town only has a few main streets to move the populace through to get out, while emergency responders were trying to move in. I-35 was also choked with normal traffic, emergency responders, and the ever present construction along that corridor.

If your town had a mandatory evacuation for a man made or natural disaster, do you have  a plan in place on how you would safely move your family out?

Was there a better way out?

Everyone was headed to the highway to get out. But maybe, just maybe, there were other ways to get out? Maybe there were back roads and farm roads that could have been tried to get away from the main flow of traffic and out to find safety elsewhere.

ESCAPE SCENARIOS TO THINK THROUGH:

And escape plan might be similar to an evacuation plan, but you might see it as a little different. An evacuation plan is a long-term plan, in my mind. But an escape plan can pertain to more than just a natural disaster. It’s a mindset of having a Plan B and a Plan C for most realistic events in our lives.

Let’s say a storm was moving through your area, but there was no where for you to take cover. You decide that your best course of action to was to move perpendicular from an oncoming tornado, and move out of the area as fast as possible. If you don’t know the roads, aren’t familiar with your area, you could find yourself going right back into the danger.

There is a major wreck on the highway that shuts it down. You have a chance at jumping off, but don’t know where you are, don’t have a map, do you take the chance of getting utterly lost and wasting hours? Or do you jump off, come up with alternative routes to get you away from the craziness, and save yourself six hours stuck on a highway?

True story – My husband was stuck in a position just like this. Unfortunately for him, the moment he finally saw that the traffic he typically experiences was actually going to be a complete halt, he had just passed the last exit. In his case, he had no other exit strategy, but had some of these other concepts working for him, for the moment he could get away.

These aren’t only for the ‘end of the world’ scenarios. If you’re being displaced for a period of time, having your bug out bags / 72 hr kits will give you some peace of mind, and not be reliant on the kindness of strangers or a Red Cross shelter. In them should contain a change of clothes or two, enough food & water  for 3-5 days, basic first aid,  important personal documents, money and shelter. (Get a free printable checklist here!) 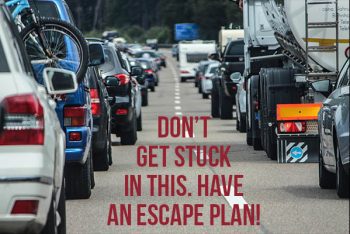 Have Alternate Routes Mapped Out

Have alternate routes from your home mapped out so that you can get out quickly in the event of an evacuation. Try not to take the main roads as they will probably clog quickly – know alternate ways of getting out, just in case. Drives these roads often as you get yourself familiar with where they lead.

• QUICK TIP: If you have a new driver, remember to teach them these roads, too!

Have a Responsibility Chart

In planning for this type of situation, it’s handy to break out all of the responsibilities and assign them to different family members. This way, no one person is responsible to do everything, everyone has a job that they can accomplish, and you can get more done in a short period of time.

Be sure to include things like shutting off your utilities, grabbing computers or computer hard drives, photos, etc. (Or make grabbing your media even easier with this nifty tip!)

Have an Emergency Car Kit

Just as having a 72 hour/Bug Out kit for yourselves, your car should also be prepared – you should always have gas in the tank, an emergency box of products you might need (food, water, first aid) as a backup to what you are packing. Make sure your car is always in good maintenance so you aren’t caught off guard. Learn how I created my own emergency car kit.

Have a Communications Plan

Have a communication tree set up within your family. You can have a code set up for what to do. Texts will likely be easier if the cell phone towers are jammed with people trying to call. Twitter is also a great way to get information out to family and friends.

But think of more than just calling your family. Grab that emergency weather radio from the house. Many have access to other bands that can give you news and reports to help you make better decisions once you’re on the road in case you can’t get them through your car radio or phone.

Have a Back Up Plan

Do you have a backup plan if there is no electronic communication? Do you have plans on where to meet up if you’re separated? Do  you have a safe place to go to?

Think back to Hurricanes Rita. It was not long after Hurricane Katrina in New Orleans and the Gulf Coast region. People had seen what would happen when it was a fight to get out of the city with hundreds of thousands of other people. But what was heartbreaking was seeing people stuck on a highway, with no way to sustain themselves. Hotels were filled up, gas stations were empty or lines were hours long. Yet did no one think of other ways to get out of the city than the major highways?

Have a Plan for Your Pets

Should you need to evacuate, be sure you have a plan in place for your pets. Emergency Shelters don’t usually allow for pets, so you need to have a plan of what you’ll do instead. If you’re taking your pets with you, make sure to allow for their space and their needs.

The what-if’s of any situation are too many to name. But some very basic preparation can help you navigate what is sure to be a stressful and somewhat dangerous event. Giving yourself the peace of mind in knowing that you are prepared at a moment’s notice can give you the ability to make better decisions for your family.

I am challenging you.

Plan an hour this week to sit down with your family and look at an escape plan. Come up with a Plan B (and maybe even a Plan C). Review your evacuation protocols. Make sure your emergency kits are handy. Create a password to quickly text your communication tree to let them know it’s time to move.

Make this an important to-do this week – find a way out!