You are here: Home / Preparedness / Don’t Allow Your Fear to Stop You 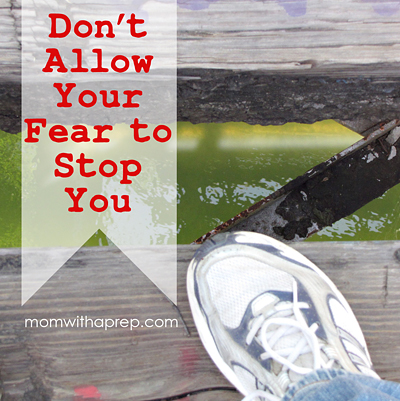 When I wrote yesterday’s post about your most important prep, I had this photo in mind, on top of some recent events in my life that are bringing the idea to the forefront that I’m just not physically ready to handle a ‘Zombie Apocalypse’. I jokingly tell my husband just to leave me behind….I’ll give he and the children some time to get away while the zombies feast on me!

But in all seriousness, it’s really a way to cover up the disappointment in myself for how badly I’ve let myself get out of shape. I’ve been scared once with a reaction that turned out to be nothing, but this weekend, I was scared, once again, but this time it was mental.

We took a walk in our area over the weekend to begin training ourselves on hiking and carrying our packs and teaching the children about quietness and other things, and we came up on an abandoned rail line. We walked along it for awhile and hit a bridge. I stopped to looked at some of the graffiti left by generations of high schoolers while everyone else crossed. Then I took a few steps. I found myself being aware of the drop, and the chance of my foot getting caught between the ties, and then turned to take the ties as I have to do when I go down stairs. A bit sideways, one at a time with the same foot to protect an old knee injury (and because my balance just isn’t what it used to be). The further I went, the more I became aware that I was taking longer and longer between steps because I was becoming afraid of the possibilities that kept playing out in my head. I’d let my foot slip, it would get stuck, I would fall, I’d snap my ankle or break my leg. They’d have to call for emergency help, I’d be out of commission for what could be a long time because rehab would be hard. We’d be in serious financial trouble….it would really hurt. Then I realized, I’d been standing still for awhile. I willed myself to take that next step, and I couldn’t focus. I was really stuck. I kept looking past the ties into the water below – which wasn’t more than 15-18 ft or so, but my fear caused me to come to a standstill, and I had a really hard time. I’ve never, ever had that happen before. All it really took was my husband walking up beside me, lending me his hand, and I crossed just fine. I kept saying it was because having that balance point and a bit of security was enough. But it was more I was so embarrassed that my kids saw it, that I was danged sure I was going to act like it was no big deal and get across. I’m thankful that he saw me, realized what had happened, and just acted as if it was no big deal.

On the way back, I realized part of what made me get scared was my approach to the situation. Instead of taking it with confidence, head on, knowing the risk/danger but also knowing that I CAN do this, I started off meekly, already filled with a bit of fear of the situation, and making a bad choice about my plan of action (I’m much more likely to become unbalanced and place my foot incorrectly with it sideways to a tie than perpendicular to a tie, but it was my first reaction when I became a little uncertain of myself and I reverted to how I come down stairs to be safe).  Then, I didn’t look at the solution, but looked past what was actually happening (on the tie itself), into the abyss (down at the water below and what “might” happen). I’ve come to realize I tend to act like that most of the time.

The what if really gets me. I try to be fully reliant on God that He is in control and what is going to happen is going to happen, but I allow the what-if’s to get to me, to scare me, and to cause me to freeze in panic mode, instead of taking His hand, in confidence, and making it through the situation, regardless of the outcome (which is 99% of the time MUCH LESS of an issue than I ever imagine it to be). But even if it is exactly what I imagine it to be, how can I allow myself to live without risk. To become so zombified in my fear that I would rather give up and just let the zombies take me instead of fighting for my life?

(So what does this have to do with preparedness you might ask? For me, it’s the absolute realization that I AM my most important prep. I must get myself into a much better shape than I am now. My weight and inability to balance or lift myself in any manner puts me and my family at risk. I know the boys will NOT leave me if something were to happen. I would put them in danger by not being able to run or climb or hide or any of the things a more nimble person could do. My mental status has lost it’s edge. I’ve read a ton on the how, but I need to be able to DO the how. And I can’t allow my fear to stop me from doing what’s really important. I need to practice, and think of what’s actually in front of me…not the water below.)

So I must step out confidently. Can you?

Join me for the further adventures of trying to become the best Prepared Mom I can be!

©2014 by Mom with a Prep {blog} and may not be copied in part or in whole without the express consent from Mom with a Prep. This post may contain affiliate links. Shopping through these links helps support the efforts of Mom with a Prep.com and our family. We appreciate you so much!