You are here: Home / Preparedness / Don’t be an Armchair Prepper 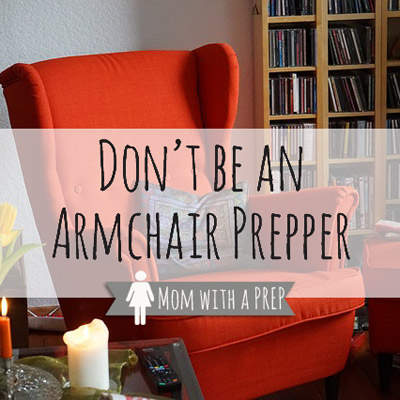 You know that guy who sits around in a room full of stuff, talks a big game, has seen ALL the Doomsday Prepper episodes, but doesn’t really KNOW how to use anything and is relying solely on what he can store that he purchased from a store? That guy isn’t likely to be self-sustainable if he doesn’t learn how to garden, hunt, or the myriad of other things to keep yourself going when your stuff runs out.

You know that woman who has a houseful of supplies, but doesn’t actually do anything with them, nor can she defend herself or take care of her family if her husband isn’t around, but she can tell you all about  the ‘prettiest’ bug out bag she just bought that will make Vera Bradley smile.

Being PREPared isn’t about how much stuff you can accumulate. Really, it isn’t. No matter what you see on Pinterest, in forums, on Youtube. You can have all the stuff in the world, but if you haven’t learned how to use it, you don’t know how to survive without it, you’ve just become a hoarder. That’s right. I said it. I equated prepping and hoarding in the same sentence, and I meant it. No matter how organized you have it (which is how some preppers justify their stuff ), if you aren’t actively using it to learn to sustain yourself, you’re just hoarding. This is completely different than having a supply ready to go if it’s needed, and you know how to use what you’ve stored, store what you’ve used (hmm..have we heard that phrase before?)

Having a ton of stuff does not equal being a prepared. (Conversely, not having the knowledge base of the native people’s bushcrafting mean you won’t survive, either, Mr. Survivalist.)
Just so you know – I’m preaching to myself as well as everyone else. It is too easy to fall into the mindset of if I don’t have stuff, I’m not a true prepper, so family budget be damned…we’re gonna go get some swag! This weekend, we’re going to go out and get everything that my husband’s Get Home Bag still needs. But we’re not about to go blow our food budget for the year on kitchy prepper swag – we’re going to make reasonable purchases for things we don’t already have and can’t do without. He might be named least fashionable Prepper on “What Not To Prep”, but we aren’t focused on that. We’re focused on keeping him safe and getting him home.

And don’t get me wrong – swag is cool. But swag with no knowledge, swag with purpose, and swag with no ability to live without the swag is just junk. Don’t be that guy or gal.

As I’ve encouraged before – both for myself and anyone reading: