You are here: Home / Food Storage / Can You Freeze Mushrooms at Home? You Bet You Can!

We are a participant in the Amazon Services LLC Associates Program, an affiliate advertising program designed to provide a means for us to earn fees by linking to Amazon.com and affiliated sites. 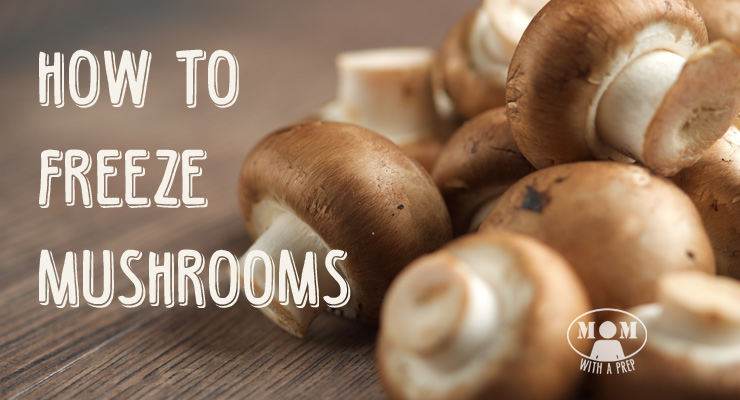 You know that time that you are looking at a local grocery ad and seeing mushrooms on sale for and you squeal? You just might be a food storage junkie!

When Aldi’s has a mushroom sale, I stock up HUGE! It’s not unlike me to call and reserve 3-4 trays (each tray holds 12 8oz packages) to bring home because they prefer you don’t purchase that many at once just walking into the store. However, this doesn’t mean that you can’t do it. They won’t turn up their noses at your money, they just want to make sure you aren’t clearing their shelves for other customers.

I also find mushrooms on clearance at our local Kroger fairly often and grab those as I can as well. I usually dehydrate these as they may be nearing the end of their useable shelf life if we don’t cook them immediately.

Finding ways to preserve our food when we find great grocery deals, have an overabundance of garden bounty, or find ourselves with loads from u-pick-it farms, is one of the biggest day to day tasks that I have for our family. I don’t limit myself to pre-packaged freeze-dried foods or simply dehydrating or canning, but I also include my freezer in the equation!

For our discussion, I’ll be talking about the cultivated mushrooms most people know as white button mushrooms or the brown crimini mushrooms. There are a ton of varieties of mushrooms and these general guidelines will be good for them, but they each have their own distinctive characteristics.

How to Store Mushrooms for Short Term Usage

There are so many ways suggested to store mushrooms such as in paper bags, in damp paper towels, and lightly wrapped in plastic, but I prefer to just keep them in their original container until use. Because I rarely open a container and don’t use the whole thing, I don’t worry about storing an opened container, but just wrap again in plastic wrap and put a few holes to allow air movement and less sweating to help preserve them longer.

We normally dehydrate all the mushrooms we won’t be eating in the next 3 days (I will sautée them as a side dish or for mushroom swiss burgers or for other beef and mushroom meals). It’s a quick and easy process and preserves both the dehydrated mushroom and mushroom powder. But I have another great way to preserve mushrooms – I freeze them!

How to Freeze Mushrooms

You can freeze a variety of mushrooms in their raw state, but I don’t really like the end product as well as I like it when I do this variety. We save the fancier mushrooms for using fresh and raw or rehydrated for meals but will freeze the button mushrooms a lot for inclusion into dishes like spaghetti sauces, stews, etc.

Rinse under water and allow to dry in the open air on a tea towel. YES, you can do it. Alton Brown proved it through an experiment on his show Good Eats that mushrooms only absorb a negligible amount of moisture in this process, which is so much faster than the next. The only issue is your dehydrated and frozen mushrooms will be a little browner as an end product, but it doesn’t affect their flavor at all.

Brush off with either a towel or a mushroom brush. 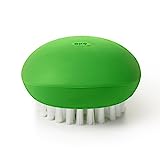 You’ll need to slice your mushrooms in a uniform size if you can, and about 1/4″ will do.

I have played around with using an egg slicer to slice my mushrooms, but as you’ll see, because our mushrooms were just a tad less than perfectly firm, it killed my original egg slicer because I was a little too hard on the first slice. 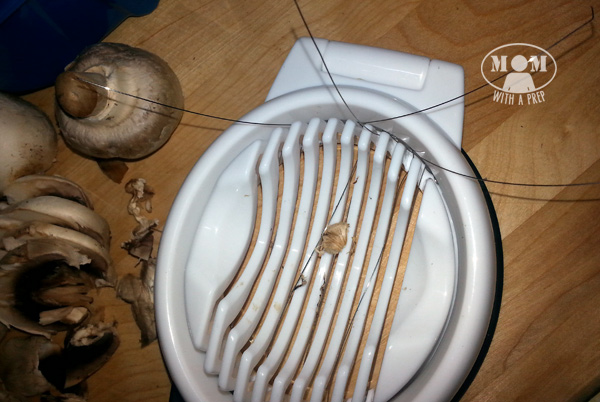 So I had to go out and buy a new egg slicer to replace it. 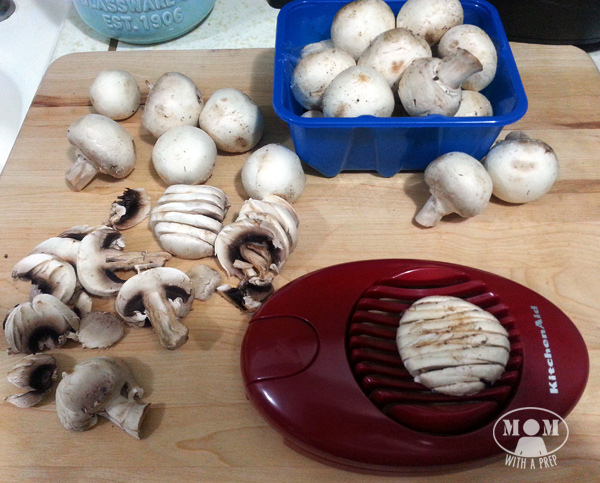 There are some specific mushroom ‘slicers’ (but I’m not a big fan of unitaskers) out there, or there are some heavy-duty egg/mushroom slicers (this model has blades instead of wires which will work much better), or you could use an all-in-one gadget that does everything. If your mushrooms are super firm, this can work and saves a lot of time. However, it’s best to go ahead and just get the knife out and make a party out of it! 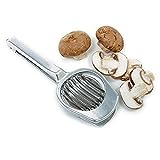 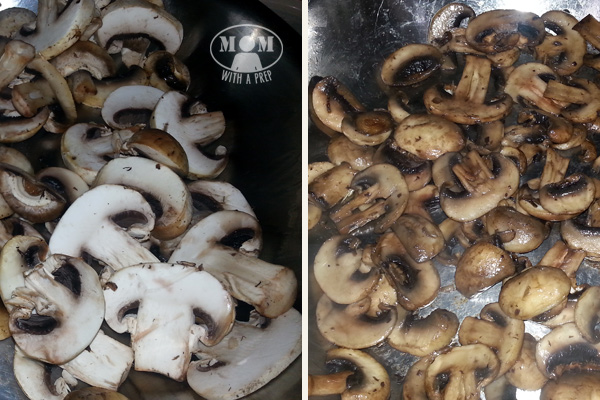 I get a fairly hot pan going and let those mushrooms carmelize a bit and then lower the heat a little and allow the mushrooms to cook. I use a little butter and oil mixture to help keep things from sticking, but you don’t want to use too much. Butter has a lot of moisture and you don’t want the ‘shrooms having to deal with that as well. Once the mushrooms have released their moisture, I tend to turn the pan up just a bit to help get rid of it.

You can also add a bit of salt to the pan once the mushrooms have turned this ‘translucent’ color, as it will help facilitate the moisture reduction, but for freezing, I skip that step.

Lay your cooled mushrooms out on a tray, single layer, and ‘flash freeze’ in the freezer 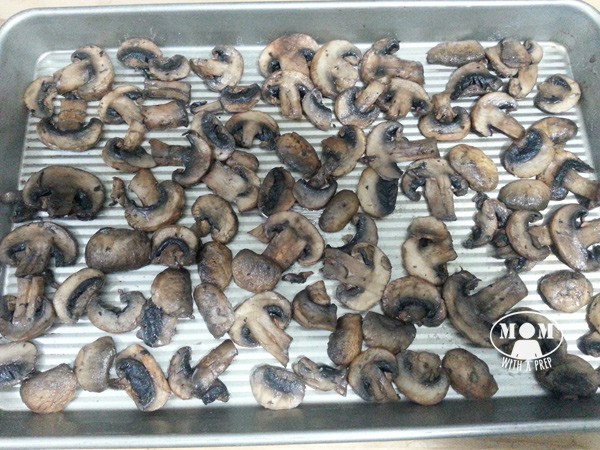 This is what they look like when they come out. The “frost” you see is not freezer burn, but the tiny layer of frost that they get when you first pull them out.  You’ll want to act quickly to move on to the next step because they do begin to thaw fairly quickly on the surface, which will make them tend to stick together once you do the final storage. 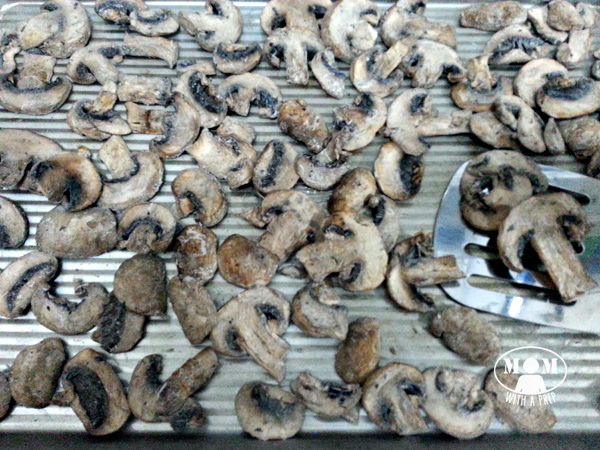 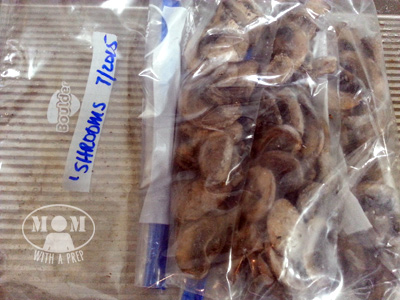 I store my mushrooms in 1C quantities in individual bags, then store in a larger bag. I remove all the excess air I can from each bag to help keep them from getting freezer burn. When I’m ready to use it, I can just pull out a bag and toss the contents into a sauce. 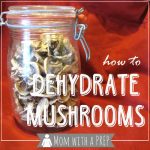 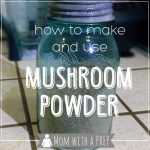 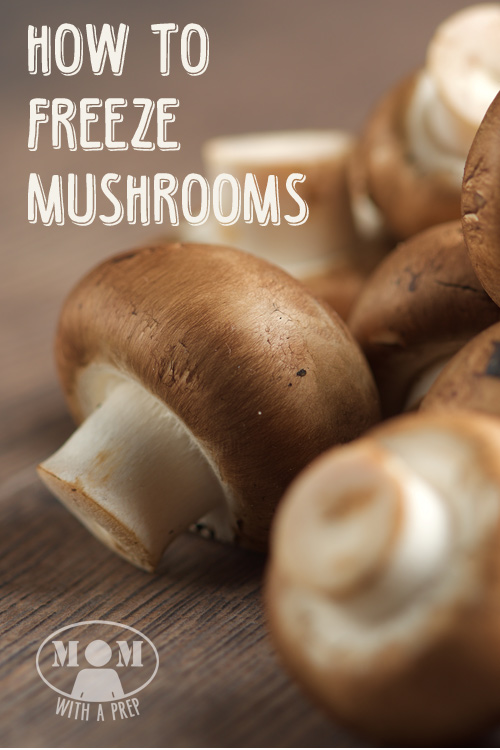