You are here: Home / Homemaking / Off-Grid Alternatives for Your Stand Mixer Attachments

So, how’d that 4:00 meal go without the ability to use any of your electric kitchen appliances go? Did you call the pizza guy after all? 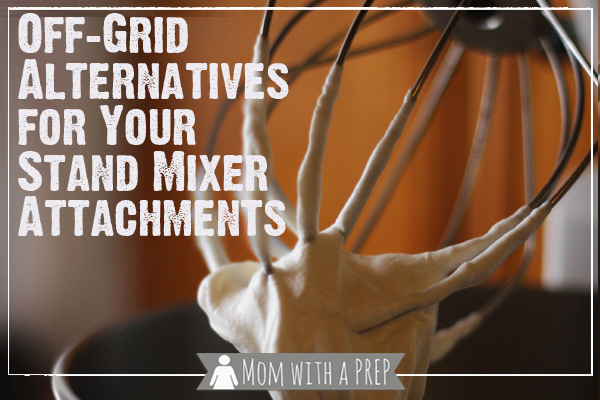 This got me thinking. I love my Stand Mixer very very much. In fact, it has a name when no other appliance in my house does. It’s name is Betty. I have quite a few accessories for Betty to wear, as well. What will I do if we’re in a grid down situation for an extended time. I’ll have to have some alternatives to replace those attachments if I want to try making a life without her (but a lot like the life I had with her). I have a friend who has gotten rid of so many of her kitchen tools and relies almost solely on what her Stand Mixer can do for her. She’ll really be in trouble when there’s a power outage. However will she slice a carrot? (Seriously, her machine runs ALLLL the time).

Pasta maker – Granted, pasta is as easy as making the dough, rolling it out, and cutting it with a knife. If you need a maker, be sure not to get the cheapest one on the market (ours was actually flaking off the silver finish into our pasta), or maybe just invest in a fancy ravioli stamp, instead.

Grinder – Grinding meat is great for preservation with jerky and sausages, and it’s one that an off-grid house needs to be able to cure some cuts of meat. Invest in the best you can for how much you’ll be using it.

Ice Cream Maker – (this one takes a bit of a stretch because you’ll need to be in a climate where ice may be gotten easily.) The obvious answer is an old-fashioned ice cream bucket! Put the kids to work!

Slicer/shredder – While the bulk quantity of using the stand mixer’s slicer shredder is really nice, without power, that’s useless. So grab a mandolin and a good pair of sturdy gloves and get to work. Pull out that grater, too!

Strainer – straining food is easy enough in a fine mesh strainer for small amounts, but if you’re doing a lot for canning, you want something heartier like this.

Grain mill – I admit that I haven’t invested in the stand mixer’s grain mill as my blender does a nice job of small amounts, but in a post-disaster world, you’re going to need something manual like this grain mill.

If you’re an attachment collector, think on these things and see if you have a manual version that can replace them in your kitchen now.

Of course, you can keep all your gadgets (except for the ice cream maker) by converting your stand mixer to a manual one! 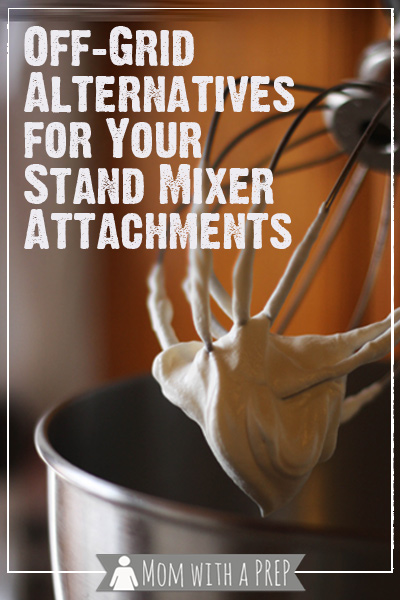