You are here: Home / Creating Self-Reliant Kids / Kids in the Kitchen: Pizza Bar 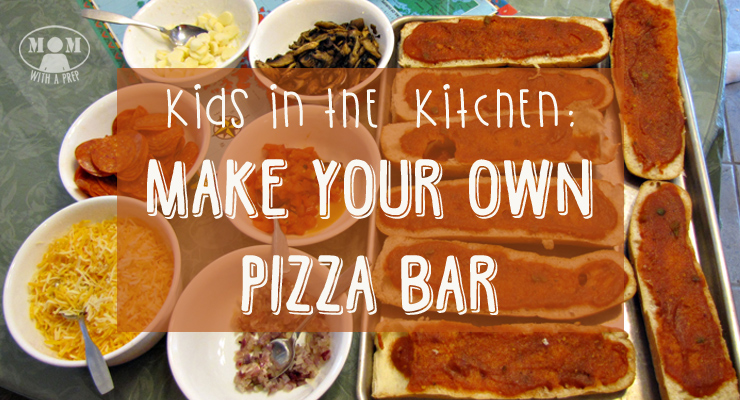 How do  you do a quick, easy, inexpensive, healthy lunch for a bunch of kids on the fly? A Pizza Bar! In our continuing series of Getting Our Kids in the Kitchen, we focus on teaching kids self-sufficiency skills by learning the virtues of preparing and cooking meals on their own. Not only will they be able to grow up and provide meals for themselves or their families, it’s a skill that can help them in emergencies if they aren’t around someone who can cook for them, and extends to other kinds of self-sufficiency skills and even math and science! Plus, for picky eaters, it can help them have control of their food and be more likely to eat a wider variety of foods that they helped make. To take it one step further ( or back ), start by getting your kids out in the garden to help grow their own foods! First, give your kids the tools to plan, shop, make and create their own meals! We had the idea to do this when we had friends over a few years ago for lunch. It was going to be a lot of kids, so we wanted something fun, healthy and easy, but that allowed me to begin to teach my kids some of the hows and whys about meal preparation that went beyond food just showing up on the table.

We started out by having the boys help plan what we were going to serve. Once we had the idea, we shopped our food storage first. We already had pepperoni, dried mushrooms and canned olives in our pantry. We had cheese in our freezer, tomatoes from the garden and just needed to get onions and bread. They wanted french bread style pizzas, and since I’m not yet a bread baker, we did rely on the store for these items.

To put them to work, they rehydrated our dried mushrooms, collected dried herbs from the pantry to create our herb mix for the pizza sauce, got the canned olives (sorry – we don’t have our own trees for that one!) and pepperoni from the pantry, cheese from the freezer and tomatoes from the vine. We did use storebought french bread (as I’m not a bread maker, yet), but you can make your own! We also sauteed onions in the cast iron skillet using coconut oil since it has such a high smoke point. They worked their magic with their own concoctions, then threw them onto the pizza stone to cook.

Whenever there was preparation to be done, I supervised while I let the boys do most of the work. It helps them have confidence that they can cook! 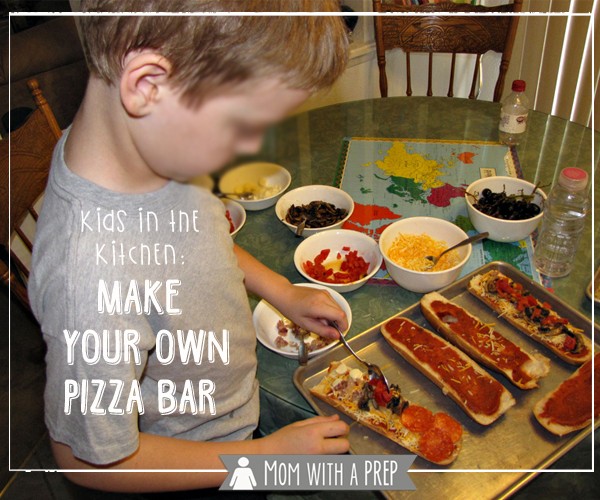 Then we threw them into the oven to let them cook while the kids played. Once their pizzas came out, they were even more enthusiastic about eating because they created their own lunches – with everything they loved.

Some other ideas for pizza ‘bottom’s

The kids felt empowered that they’d prepared so much of the meals, themselves, and really enjoyed the pizzas much more because of it!

Make Your own Pizza Dough Tips:

Make  Your Own Cheese Tips:

What’s one of your favorite healthy, inexpensive, lunch ideas for groups of kids?