Having a fire pit in your backyard is an awesome way to have a backup for cooking when the power goes out, and it creates a great space to gather round and spend time with your family away from technology and just talk. How about that? 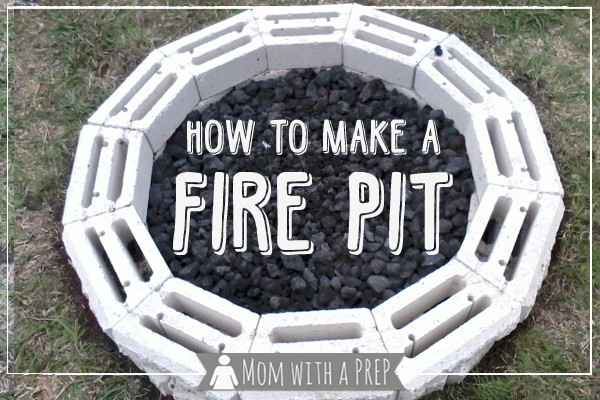 NOTE: This post was written as we went – and is now fully updated with all the steps we took and photos.

Most of all, it was kind of cool. I think that was what clinched it!

Our plan to build a fire pit

We spent a lot of time at Lowes, planning and analyzing this project. We toyed with a simple square cinder block design with a grate over one end, but he really didn’t want it, especially after looking at how cinder block holds up over time. This was going to be the featured thing in our backyard, and we did want to make sure it looked nice as well as being functional.

We decided on a hollow concrete landscaping brick. We chose it because it looks nice, it was priced reasonably right at $1.87 per brick (only about .50 more than a cinder block even though we’ll have to use a few more of them), and it had areas for rebar built in so that we can reinforce the structure without having to use cement. Each row eventually cost around $25 – which will end up being not an inexpensive fire pit, but it is what we wanted. It looks nice, won’t rust in a few years, and doesn’t call attention to itself as anything more than something fun in the backyard.

In total, this project was around $140. You can make the same thing much less expensively, we just chose to do the layering of lava rocks and sand instead of just using base sand. We could have used smaller bricks and made a smaller pit, which might have been better for the size of our backyard. But we wanted to be able to use it for outdoor cooking, and more. After the fact, we might have spent less or found a different design, but we’re still happy with it.

We purchased in stages and added another row as we went along until we had it completed.

To complete this project, we purchased:

2. Place materials in the area you want to make your fire pit to be

Be sure that it won’t impede flow of movement, that it is far enough away from structures, and that it is in an area that will be safe to be around in the dark. 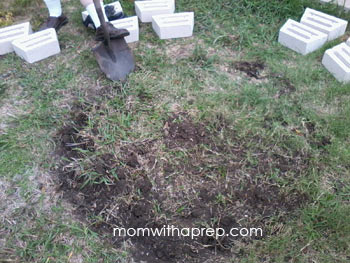 3. Dig out your sod down to the level you want the bricks to sit. 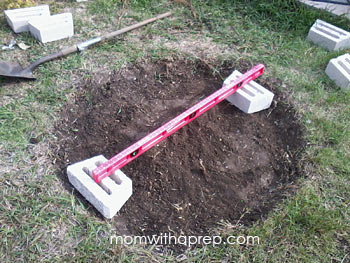 4. Place bricks and level them in each direction so that your structure will be sound.

We found that it was really important that the sides of your hole are straight (and we used an edging tool instead of the shovel to do it once we’d dig the main hole. 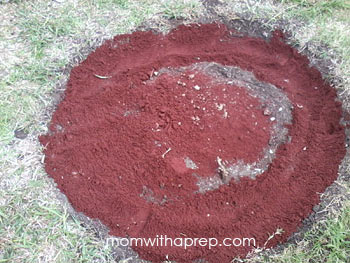 5. Line your pit with a base material.

We chose lava sand as it is a material my husband likes. 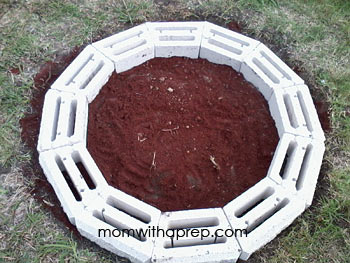 Make sure each brick is sound in placement. It shouldn’t rock, and should be level not only with the bricks next to it, but the bricks across from it as well. We used a long level that I didn’t take a photo of to make sure of it being level. 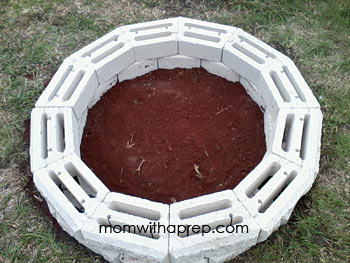 7. Place your next layer.

We also filled the middle of the pit with a layer of lava sand as the base. 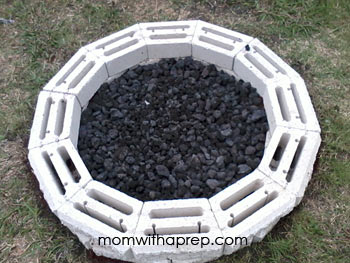 8. Fill the pit with lava rocks.

My husband chose this as a base for placing a fire, so that it had draw from underneath as well as helped distribute heat more evenly within the pit. Like the lava sand, this is not a step you must have for your pit, but it’s one we chose.

9. Insert rebar into every other brick with a sledgehammer.

Since these are offset, it seemed to work well for us. The pit is sturdy and firm. Only the capstones have a tendancy to shift since we opted not to add concrete to keep them in place. This is in case we decide to build it up or change the configuration. 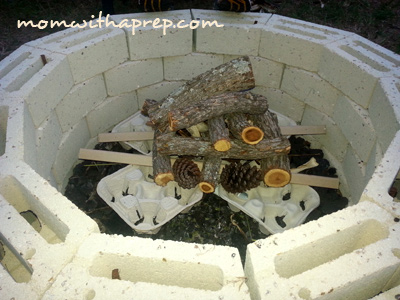 Here is the height we’d originally planned, but we took the top layer off to make a more productive pit.

I can’t wait to get my cast iron bubbling away and learn to cook by campfire. I envision a cast iron tripod plus lovely chairs around the ring at some point, but for now, our old plastic yard chairs will have to do.

Eventually, we plan on having a grate that will cover at least half of the 4′ diameter from 2 grill grates and an iron bar. This will give us a grilling capacity if we need it, plus a place to set pots on if we don’t want them directly in the fire. But that will be down the road. Until then, we’ll settle for a smaller grill to put over the coals.

UPDATE: We built our fire pit up to the height we had planned, but didn’t cap it off with the cap stones because we felt it really wasn’t necessary and was an unneeded expense at the time. However, after using it for awhile, we realized that making it too high create an issue with smoke, so we dropped it back down and will use those bricks in another project, then capped it off. 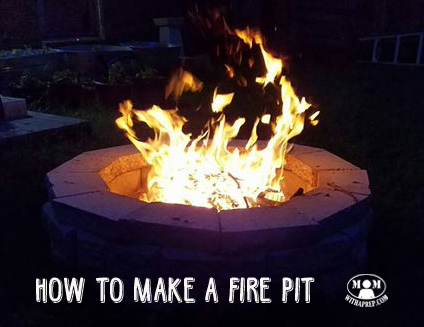 Here are the accessories for our pit that are on my wishlist to make it complete that might work for your backyard pit, too! (you can click on any of the images to get more info)

But for now, we cook things on sticks. That’s been working really well!

And here’s our completed fire pit – two years in use. This is after a few weeks of cleaning up the yard for spring, we toss in twigs and small branches to use for kindling and fire starting! Win-win! 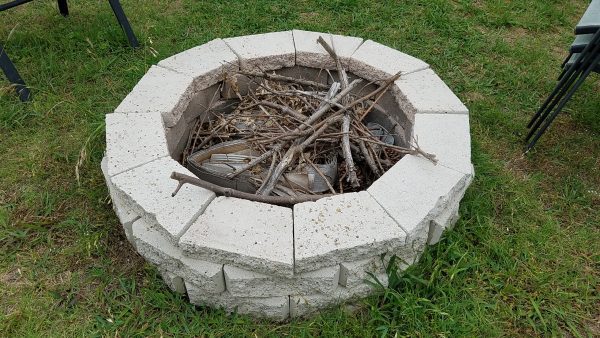 Hope this gives you some inspiration!