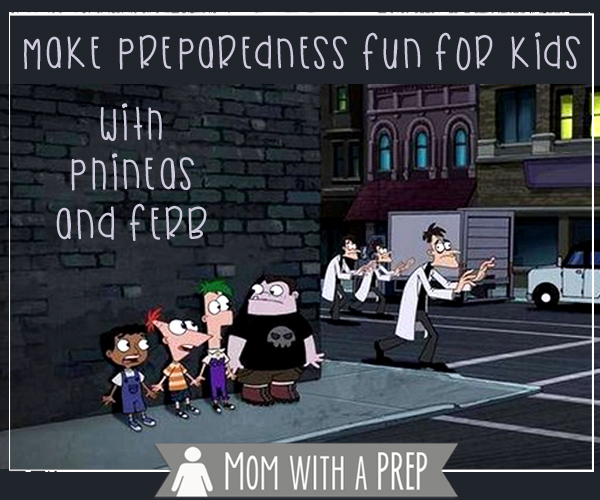 This weekend, my family and I finally got to sit down and watch one of our favorite shows for kids (shhh…we watch it when the kids aren’t around, but don’t tell!), Phineas & Ferb. This episode was a silly zombie apocalypse story called “Night of the Living Pharmacist” where the zombie Doof’s spread and the kids had to deal with it. It mixes humor from World War Z,  Shaun of the Dead, Die Hard and more. But never in a bad way. They do a lot of adult humor disguised in the show to make the parents laugh, too, which is a good thing.

But imagine a group of rambunctious pre-teens and teens showing off their zombie fighting skills plus emergency preparedness skills and supplies for your kids to see! It becomes one more place for them to get affirmation that it is something important for them to pay attention to, and for you to help encourage them to embrace! All is not lost as long as they have water, electricity, the phone and the apps they need to build a machine to fight the ‘zombies’ until…ACK! The poo hits the fan and they’re on their own!

Not only will you see the kids learning how to survive a disaster, you’ll see them talking about what to do when the lights go out, how to stock emergency preparedness supplies, learn to adapt to no utilities and make something work, and more! And it’s a great Girl Power show without the politics behind it.

Go ahead, look for it on the Disney Channel. It’s fun. And your kids will love you for it!

YOUR THOUGHTS: What are some other shows aimed at teens and pre-teens and even younger that you’ve seen begin supporting an emregency preparedness message?

Join Mom with a PREP as we prepare our families for life’s emergencies, one day at a time.

Join Mom with a PREP as we prepare our families for life's emergencies, one day at a time.