You are here: Home / Preparedness / What the Heck does that Even Mean!? A Glossary of Preparedness & Homesteading Terms 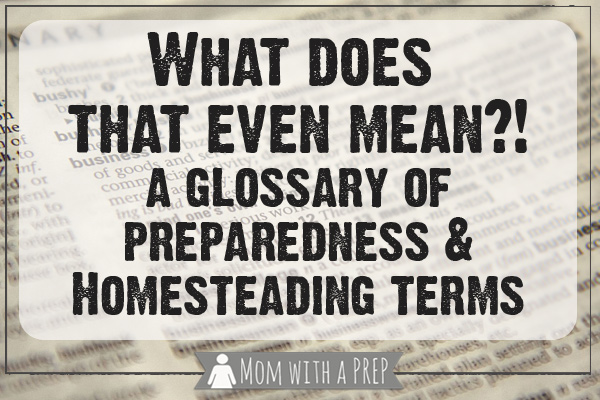 Do you know how it is to walk into a group of folks who are well versed in their speciality, and they are talking and throwing around terms and acronyms and you haven’t a clue what they’re talking about, but you really want to understand? That’s how I felt when I first started investigating just what it meant to be prepared, and sometimes, I felt clueless because folks were talking in such prepper-speak that I couldn’t understand what they were trying to teach me.

Some of the terms are used in the hard core prepper community, some by the homesteading/self-reliant community, and some are generic to everyone. I’ll be explaining the terms in non-prepper-speak so that you know how I take them, and I’ll be keeping it fairly mainstream. There may be more technical terms and explanations, but this is the basic of what they mean.

A military style backpack that is popular because of how much it can hold.

The science of raising, breeding and training animals for domestic use, particularly for the homestead, farm or ranch.

This is an emergency bag created when there is no hope for return to your home, and you have to ‘bug out’. It is a term often mistakenly used in place of  “72 hour kit”, which is more a bag put together to get out for a few days during the event of a localized crisis or weather event. Also known as an I.N.C.H bag for “I’m Never Coming Home”.

This might be a secondary home, cabin, rally point or other location where you plan on retreating to in the event of a crisis big enough to make you leave home.

This describes a vehicle created specifically to help you get out of geographical area in the event of a crisis. It could be a pre-70’s truck or Jeep that doesn’t have current electronics and probably won’t be effected by an EMP, or a armored vehicle, or even just a souped up SUV to help store more and protect more from things going on around you.

The act of hunkering down and staying in your location waiting out a crisis, war or disaster happening around you. You may choose this because you have no where else to go or you choose to stay because you are well prepared.

The act of grabbing your stuff and leaving your location to get away from the crisis, war or disaster happening around you. You may or may not be returning to your location, so generally you are packed and prepared to leave.

Pronounced cash or cash-A – a hidden stash of ‘stuff’ that you can grab in an emergency. You might have a cache of coins buried at the trunk of a special tree, or a cache of weapons tucked away at a rally point.

Communications – pertaining to Ham radio, hand signals, or any other means of communication.

Most associated with National Geographic’s Doomsday Prepper show, it is the description of people who are ‘preppers’ and are preparing for a disastrous, doomsday event, and might be just a bit over-excited to do so.

Refers to those things you carry on your person every single day. It can include car keys, a wallet, a watch, a phone, a knife and also include a lot of survival equipment as well. Read about my personal EDC.

Made famous now by William Forstchen’s One Second After, an Electro-Magnetic Pulse is when there is a burst of radioactive energy that can damage the electronics and communications of the Earth. It might happen from the burst of a nuclear weapon high in the atomosphere or from the Sun’s solar over-activity (otherwise known as a Coronal Mass Ejection or solar flare). You can read a layman’s description of it here. Either way, it is thought that it will bring on a short or long term power outage across the area it effects, making communications difficult or impossible, and making electricity impossible to get because of the damage to transformers and the electric grid.

A container built in order to protect the electronic contents form EMPs and CMEs.

This is the governmental agency put in charge of how the government reacts after a crisis or disaster. FEMA is the agency on the ground after a tornado disaster in Oklahoma, a hurricane in New Orleans or an attack on the country. They provide emergency health care, shelter, food, water, etc. as a governmental entity, separate from the Red Cross, though they may partner with the Red Cross to achieve their goals.

FIFO – First In First Out

A term used to describe how you should rotate your food and supplies. When you buy new supplies, rotate the older to the front and put your new stock to the back.

This is a bag packed by those who choose to keep something handy for short trips to get them home in an emergency. It might be used by folks who commute a distance to work. You can read more about my husband’s Get Home Bag here.

The period of time after a crisis or world even when the power grid and other utilities and government agencies may be inoperative.

A term used to define a lifestyle based on self-subsistency through food preservation, animal husbandry, gardening, ranching, energy preservation and etc.

These are the packaged meals made for our military where they can have a full meal, including something hot, without the need for a kitchen, fire or preparing provisions. They store for long periods of time and usually come with a main meal, a drink, a snack/dessert, coffee, condiments and utensils.

The act of living a self-sufficient lifestyle where you are not reliant upon any government or utility. You do not need to be hooked up to city water or power or lines of communications. You either do without or are using solar/wind/thermal/water power to run any appliances in your home, and are using natural means of getting water such as wells, springs, rivers or lakes.

The term used when referring to keeping quiet about your plans. It’s a military term that is a rally cry for preppers everywhere to make sure you keep your plans and preps quiet so that no one knows what you are doing. COMSEC would be the equivalent to keeping your communications secure, so as not to let your ‘enemy’ know what you are talking about.

I’ve heard this used most in relation to fiction, but it can be used in a lot of situations.

The idea of creating  a homestead that works together between home, livestock and garden to create a cycle of self-sustainability rather than separate entities that doesn’t work together and create more waste and work.

A survival tip that says you have 3 minutes without air, 3 hours without shelter (in extreme conditions), 3 days without water and 3 weeks without food.

A term of a lifestyle where you produce as much food, clothing, shelter and other necessities as possible, but work together with others to make up for the things you cannot in exchange for your trade. You work for what you need, trade for what you don’t have, but still make those determinations for yourself as opposed to relying on outside sources.

A term of a lifestyle where you produce all that you need for yourself, and do not rely on outside sources for anything.

The time period in which you can store a food or product before it goes bad. This does not necessarily equate with the ‘used by date’ or ‘expiration’ date on product packaging.

Poo hits the fan. When things get really tough.

Person who tends to keep their focus on skills and little equipment rather than the stocking up style of preppers.

The End of the World as We Know It. (see SHTF)

The act of creating a homestead in a city or neighborhood, usually on small pieces of land within an urban or suburban environment.

WROL – Without Rule of Law

The time during a crisis when society may have broken down and there is no official law and order.

Your Thoughts: What are words or acronyms you hear thrown around all the time by the preparedness & homesteading communities that you don’t understand? 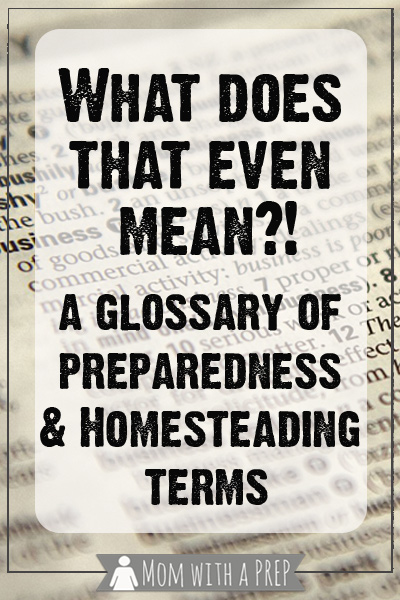