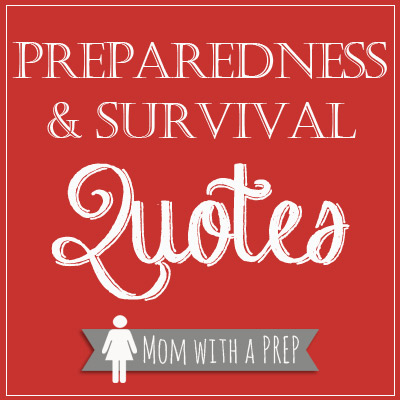 A collection of Preparedness & Survival Quotes that can help motivate you to do more for your family!

“Be Prepared.” –The Boy Scout Motto

“Also take with you every sort of food that is eaten and store it up. It shall serve as food for you and them.” –Genesis 6:21

“Learn to sustain yourselves, lay up grain and flour, and save it against a day of scarcity.” –Brigham Young

“A prudent person takes precautions. The simpleton goes blindly on and suffers the consequences.” –Proverbs 27:12

“In the house of the wise are stores of choice food and oil, but a foolish man devours all he has.” –Proverbs 21:20

“He who works his land will have abundant food, but the one who chases fantasies will have his fill of poverty.” — Proverbs 28:19

“Remember: When disaster strikes, the time to prepare has passed.” –Steven Cyros

“Preparedness, when properly pursued, is a way of life, not a sudden, spectacular program.” –Spencer W. Kimball

“There’s no harm in hoping for the best as long as
you’re prepared for the worst.” –Stephen King

“Joseph gathered up all the food of these seven years, which occurred in the land of Egypt, and put the food in the cities.” –Genesis 41:48″

“If you believe you can accomplish everything by “cramming” at the eleventh hour, by all means, don’t lift a finger now. But you may think twice about beginning to build your ark once it has already started raining.” –Max Brooks

“Going back to a simpler life is not a step backwards.” –Yvon Chouniard

“Prepare for the unknown by studying how others in the past have coped
with the unforseeable and the unpredictable.” –Gen. George S. Patton

“Your responsibility to be ready for the fight never ends.”
–James Yeager

“Remember: While you are preparing for tomorrow, don’t forget to live today!” –Mom with a PREP

“Some people are making such thorough preparation for rainy dais that they aren’t enjoying today’s sunshine.” –William Feather

“An ounce of prevention is worth a pound of cure.”
–Benjamin Franklin

“You can lead a human to knowledge, but you cannot make him think.” –Anonymous

“We must not confuse dissent with loyalty. When the loyal opposition dies, I think the soul of America dies wtih it.” — Edward R. Murrow