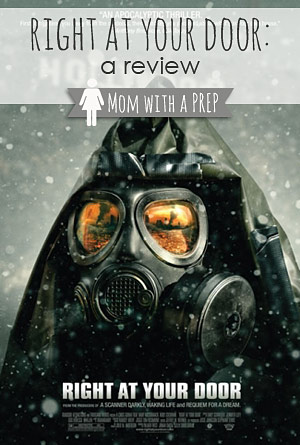 Here is the scenario: Some bombs go off in your city. Your spouse was in the area the bombs went off, and you’ve finally had to make the decision to seal off your house. THEN your spouse comes home. What do you do?

This is what Brad has to face when his wife, Lexi, has gone into downtown LA for work, and he can only presume she’s dead from the news. As he and a neighbor make the big decision to seal up their house to protect themselves from the toxins coming  from the bombs, Brad has to wrestle with the guilt in the decision.

Once done, Lexi shows up, and obviously reacting as if she’s been exposed to whatever toxins were in the bomb. With confused information coming from the news, guilt at trying to make sure he keeps himself and his neighbor safe, and wanting to take care of her, Brad and Lexi have to deal with being separated by glass and plastic.

I’m not going to pretend to be an expert on how to seal a house in this kind of situation – whether a nuclear bomb, a toxic air situation or anything else, though I’m not sure how a bunch of grocery bags and packing tape are going to seal a window (especially since every single grocery bag I’ve ever reused always has holes in it!). But the premise of using every bit of plastic from shower curtains, duct take, packing tape, bubble wrap, grocery bags, dry cleaning bags, trash bags and plastic sheets to seal a house are used. But you do have to make sure to look at every source of air coming into your house: attic accesses, cracks in walls, outlets, air conditioning/heater vents or units, plumbing, animal flaps and more.

As I was discussing this with my husband, and playing through the scenarios of ‘what if’, we talked about sealing off rooms, instead of trying to keep all the rooms viable. We talked about the what if this was just a nuclear bomb – would we get the spouse to stand outside and hose off the best they could with scrubbing off and removing all clothes, etc., and going ahead and letting them in, or sealing off part of the house and at least letting them access a room to keep out of weather, though not being able to be with you. What happened if said spouse brought others home, too, like a child? How far would you go to save them?

This film really focused more on the psychological aspect of dealing with the issue than the practical one. The husband had to deal with things like going to find his wife and rescue her or staying home; letting a neighbor in, or dealing with things on his own; letting his wife in or keeping her out. All based on his own gut and what he was getting from frantic news reports coming in and changing often. And then what do you do when you hear reports from others that are different than what you hear on emergency alerts. And the final thing…what do you do when the government finally shows up…..

All in all, a decent movie to watch to think through a scenario for yourself and how you might handle things.

But wait for the twist!

Right at Your Door is currently available for streaming view on Netflix and on Amazon Instant Play.