You are here: Home / Off Grid Cooking / Sun Oven: An Introduction to Cooking with the Sun! (and there are cookies!) 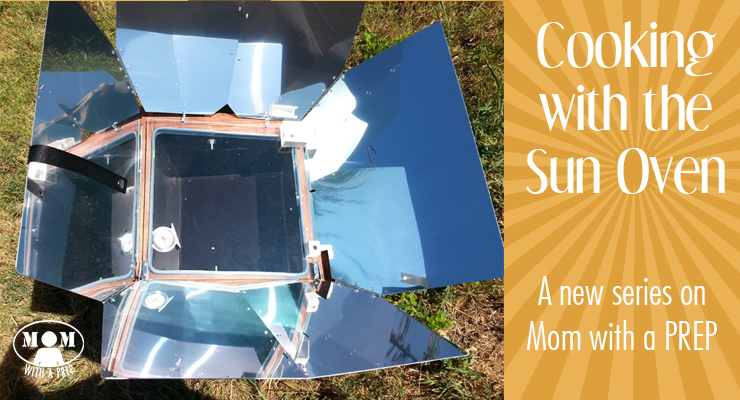 Can I tell you just how excited I am to get a Sun Oven?! I have wanted one forever, and when Paul Munsen from Sun Ovens, International, approached me and offered me a Sun Oven to try out, I jumped at the chance! (If you missed tonight’s seminar, here’s a replay of it for you!)

But why was I excited?

Advantages of the Sun Oven 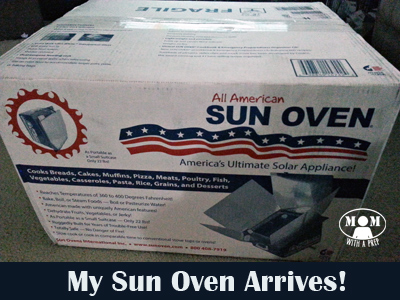 The box is fairly large – the Sun Oven weighs about 22 lbs and is a little awkward to move around, but does have an easy-carry handle like carrying a suitcase. I’m pleading for some outdoor shed space to store it permanently to make it easier to pull out and set up.

I received the Preparedness and Dehydrating package – all the parts to be able to cook with the All-American Sun Oven plus dehydrate and boil water and more! This is the box as we opened it – everything packaged neatly inside. 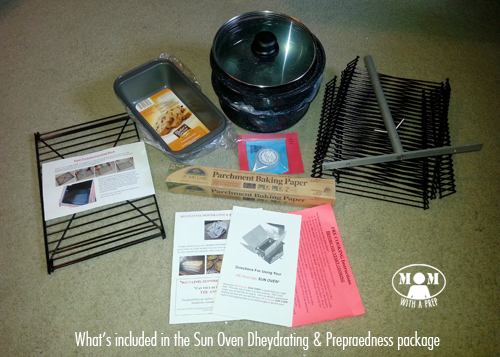 The instructions are really straight forward to putting your box together. It’s almost completely assembled, you just need to install the back bracing bar and remember to remove that protective film over the mirrored wings! I almost forgot! 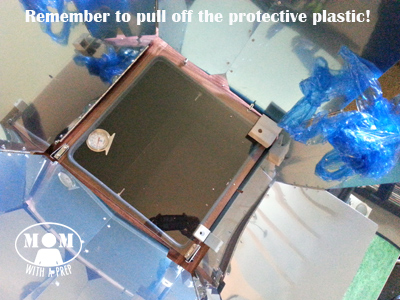 When setting up your Sun Oven for the first time, you’ll need to walk through all the steps included in the instruction guide. 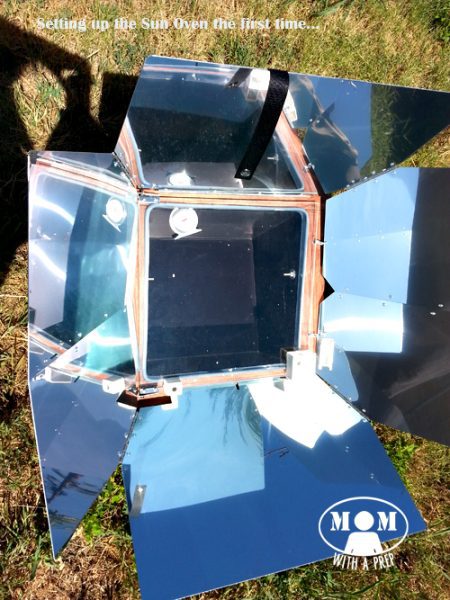 You need to level and align the box with the sun, and know that you’ll need to step out and move it during the day to keep it aligned with the sun’s movements. It’s a quick, occasional adjustment. Here’s a video on learning to focus  your Sun Oven. 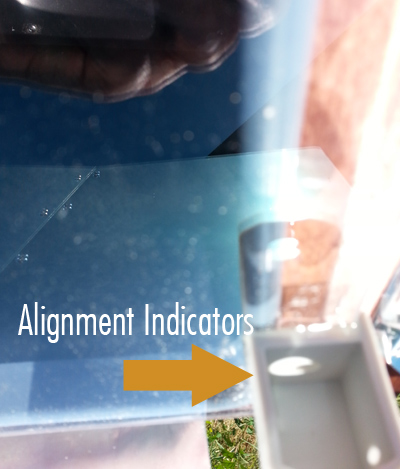 Be forwarned! The screws that hold the glass down to creat the seal that will cook your food get REALLY hot. It’s best to use some protective gloves when handling your Sun Oven. We used some stretchy winter gloves during this process instead of the large thick oven mitts. They worked fine. 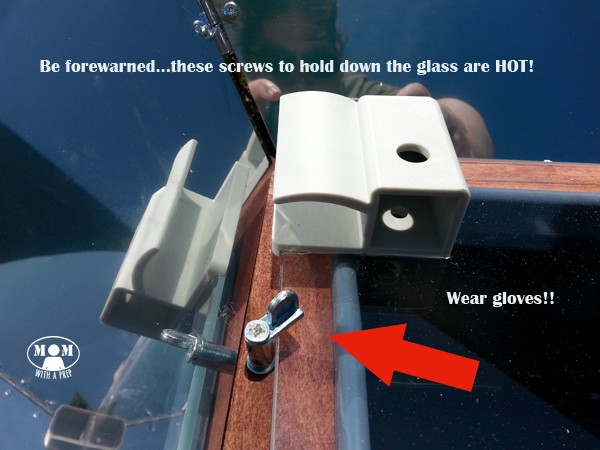 You’ll set up  your oven the run the first time with some vinegar that will steam to help clean the  unit. Then we threw in some water to test the boil. 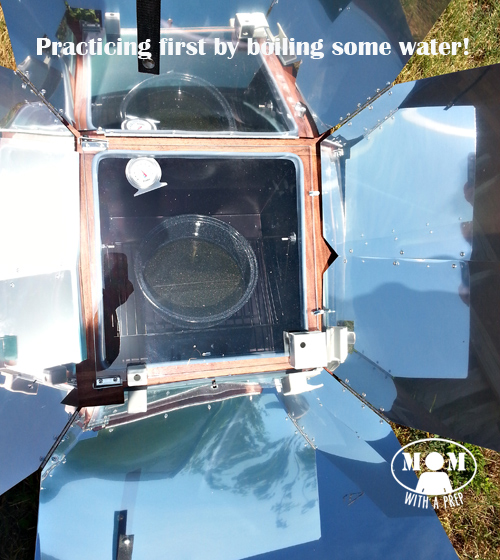 So, of course, we had to cook some food!!! We had grabbed some store bought cookies that morning knowing we’d be testing something in the Sun Oven that afternoon, so set them up on the racks… 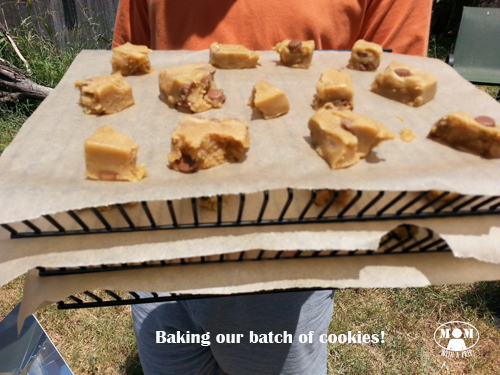 Waited a bit…and let me tell you, the boys spent a lot of time standing in front of the Sun Oven just waiting for it to finish, running out and checking every five minutes. 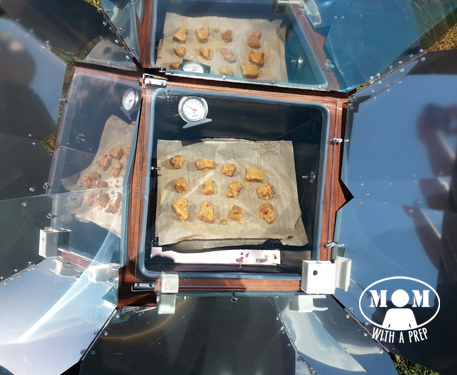 I can say, that our first test failed. But we learned something!! Rotate! The first layer is done quickly, then allow the 2nd layer a little more time to be on top and to get crisp. Then the 3rd layer needs its time on top, too. We tested another batch yesterday and it worked so much better when we learned that one little trick. We didn’t rotate, just pulled each layer off as they were done. 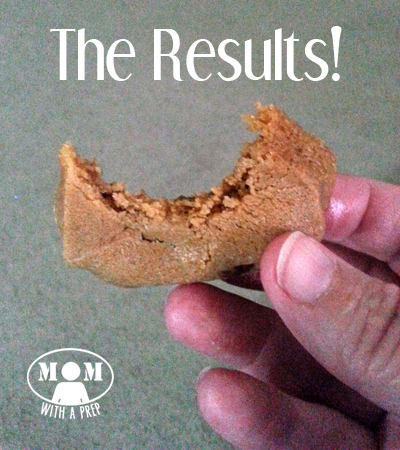 And here were the results yesterday – crisp cookies that were yummy! They don’t brown the same way as your oven does, nonetheless, they’re good!!

What you can expect from the Sun Oven Series 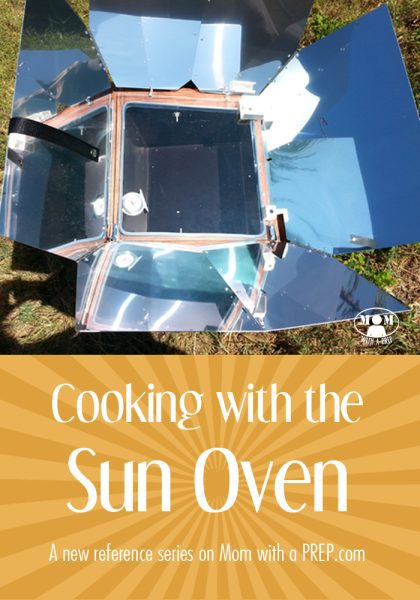