You are here: Home / Reviews / Book Review: It’s the “New World” and I feel .. Conflicted! 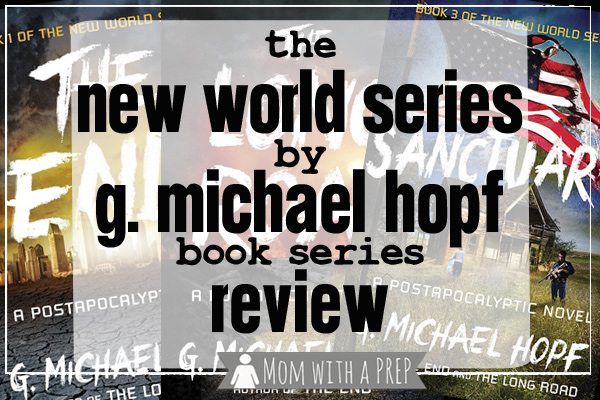 …you’ve got a great Bug Out Plan worked out for your family…..and it doesn’t work?

…the community you thought you could survive with turns on you?

…you just want the world to be normal after a devastating EMP?

…you are a serviceman stationed far far away from home and your world goes dark. Where do your loyalties stand? With your country…or the family you’ve left behind?

…you are now the President of the United States, but have no clue what is even left?

Gordon, his wife Samantha, and his brother Sebastian all find themselves in this very situation when a devastating EMP hits North America, Europe and Asia. Gordon has been preparing for his family for most of the time since he left the military, but he’s not done! Samantha can’t see a world like this being a permanent situation and has a hard time coping. Sebastian, who is stationed overseas, must decide whether he stays with the Corps the way he has given oath to, or return to make sure his family is safe and secure.

The tales weave around six separate story arcs in the books. Gordon, his family & friends; Sebastian and his journey back to the States with the Marines; Connor as he begins to try to rebuild a country that might not be left; Halley, who has lived the life and has a story to tell about it now, Barone who is trying to carve out a whole new America on his own, and Pablo who is seeing a country ripe for the taking. This isn’t a one dimensional tale about one family going through a disaster, but about people all over the country, in all walks of life, who are trying to find their way to some sort of safe haven.

None of the characters are without flaw, either. Some are pretty major, some minor, and as a warning, like with The Walking Dead or Game of Thrones, don’t get attached to any character, else you’ll find yourself throwing the book against the wall over and over again.

The End is the basic story of how it all went wrong, not just for one community, but for cultural and social communities all over the country.

The Long Road is the story of the journey to a new home.

Sanctuary is the story of trying to create a new home out of the ashes.

In all, the stories weave themselves into a history of what the United States was, how it evolved, and what it eventually becomes which is a fascinating concept to me. And lest you think I’m being vague, it’s hard to do the true synopsis of each story without giving away major plot points for the books before!

What I haven’t liked

I’m finding one of the characters pretty flat, but with a bagillion characters in the book, it would be a pretty daunting task to fully develop each of them, but if you’re going to focus on them as a main story arc, they need to have more depth of character.  There is a large portion of the book dealing with the Marines that I had a hard time reading, and it will be interesting to see where it finally fully pans out in the end.

Hopf keeps six major story points going through 3 books – all with a unique point of view to how the collapse has effected them and how they are handling it. We have a hero who is far from being perfect, though he’s no anti-hero. We have conflict that it’s not always easy to tell which is the right side. We have characters that start out pretty one-dimensional but grow as the story unfolds and they experience more to grow from. I really like that there is finally are female characters who aren’t relegated to kitchen duties and the bedroom. He also covers a multitude of cultural and social communities. You see the military life, life in an LDS compound, life in a suburb, life in a cartel, life in politics and life in a family. But even with the complexity of the story arc, the books are relatively easy to read, and while there is violence, the books don’t dwell on it.

Hopf says he’s envisioning seven books in this series, and that with book three, we’ve hit a safety spot, a place to rest ourselves before it all goes wild.

Here are the first three books in the New World Series. Each are available as a paperback or Kindle read.

Don’t have a Kindle?
That’s okay – with Amazon’s app, you can still read it on the cloud, on your e-device, through a .pdf, or on your computer.

To make things even better, there is now a Conflicted: The Survival Card Game deck based off of the first two books in the series. I love how these cards, which you can use to play as a game or just discussion points, make you think through scenarios that might happen in a post-grid world and how you would handle them. The discussions can get really lively! It’s really been enlightening to see how my husband thinks, and helpful to see that we really are on the same page about almost everything. And if you want to hear it played live, plus join in on the discussions yourself, check out Prepper Chicks After Dark on Ucy.tv where there are some VERY lively discussions based off the Conflicted Card series! 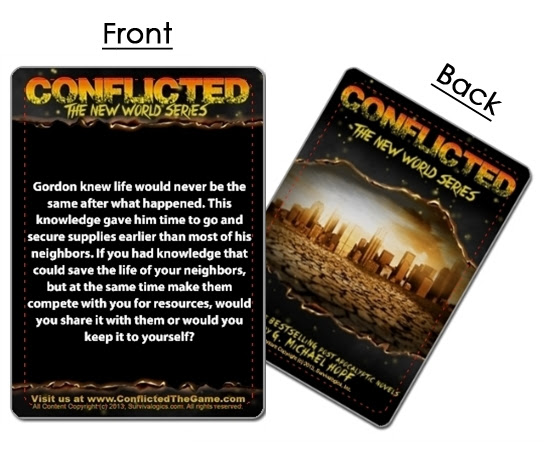 If you’d like to read my review on the original decks for Conflicted, you can read about Deck 1 and and Deck 2.

Your thoughts: What are some of your favorite post-apocalytpic stories?