You are here: Home / Preparedness / EDC/Bug Out/72 hour kit / I Tried it For You: My EDC (Everyday Carry) Bag Review 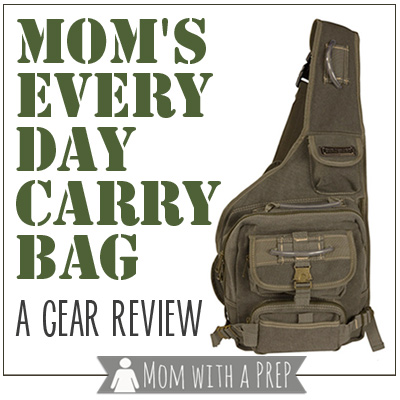 When I wrote my article on Mom’s EDC list, I got a ton of questions from people wanting to know where I got the bag that was in the image. Originally, I wrote that it was just similar to a bag I already carried (because I wasn’t going to show my bag for safety). Because I had so many requests, and because I was curious, I purchased the bag and began to use it.

This particular bag is a Eurosport Urban Style Canvas Sling Backpack  that I purchased from Amazon. Just so you know, up front, this is not a sponsored review. 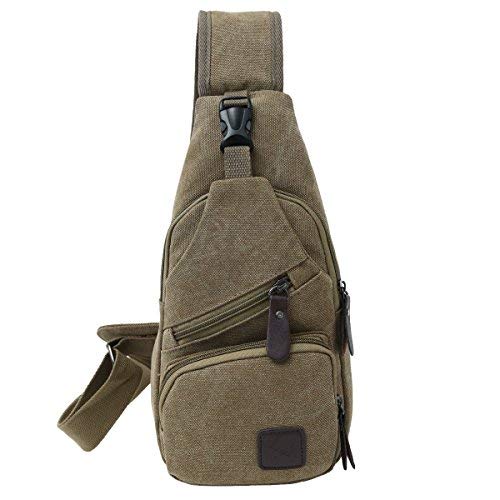 (UPDATE: The vendor I used is currently out of stock. I have found another vendor carrying it, as well, but the shipping will be different, nor can I comment on the particular vendor since I didn’t deal with them specifically.)

I was wary when I opened the box because the bag made by other manufacturers had all sorts of bad reviews about it smelling bad when it came out of the box, that it had bad stitching defects, that the hardware was cheap. I’ll say, I was pleasantly surprised!

This is a sling-style backpack meaning that to properly carry it, it will be on your back with the strap going cross-body. I do not like to carry shoulder bags, so this fits my personal feeling of safety about not having someone rip it off my shoulder walking down the street, but you can carry it over the shoulder if that is your preference.

The bag is made of a good canvas that holds a shape (though reviews of other similar bags say that if washed, it doesn’t hold that shape well).

The strap has a velcro pouch that’s perfect for my cell phone (which is a blackberry-type cell, not a larger smart phone). It also has a small zipper compartment that could fit  smaller items. the strap is padded on the shoulder and on the hip area. 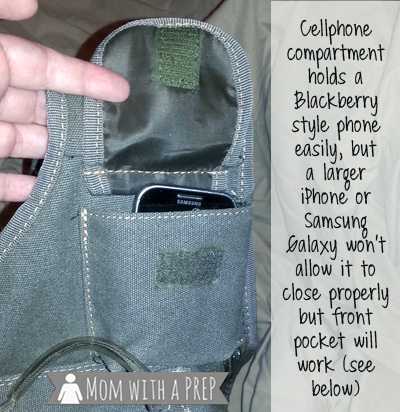 There are 2 front pockets. The first is a zipper compartment that has a flap over it that has a locking clasp. It fits my bi-fold style wallet (think man’s wallet – which I normally carry in my pocket, but if I have a skirt on, I can use this space easily), my keys, a flashlight, and a small change pouch, without bulging. The zipper is not a metal heavy-duty zipper, but a plastic zipper that has held up so far. 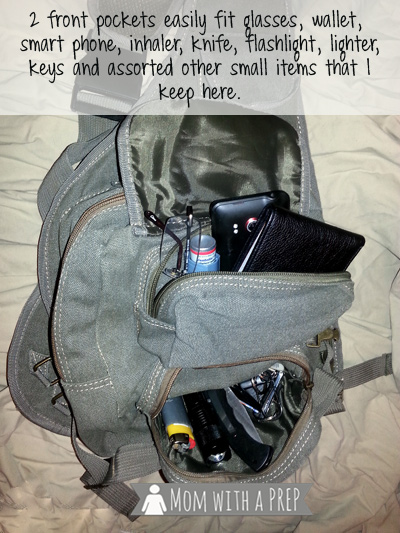 The 2nd pocket fits my most of my EDC tools (lighter, mutli-tool, knife, etc.) plus a small notebook and pen and I can still put my keys in it without it bulging if I want quick access to them. The front of the pocket also has a small velcro pocket on it for quick access items. 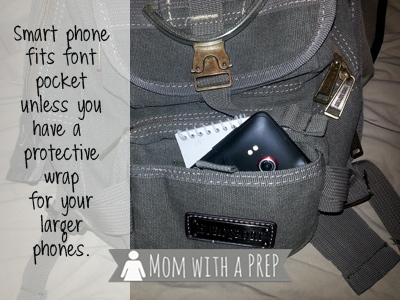 There is a large main body pouch that all of the rest of my EDC mini-bags go into (as I mentioned in my EDC article, I keep small cosmetic bags that I get free or for $1 to compartmentalize my supplies). There is ample room in this area for a few bags, my Kindle, and even more things. I just don’t have it overstuffed. This could easily serve as a diaper bag, as well – the compartment is big enough to fit quite a few diapers, a bottle, a changing pad, and a change of clothes for a wee one, plus a snack bag. This pouch is opened all the way at the moment, but if you were to open it just halfway, you could really fill it with a TON of things you might need if you were going to need it (this is when I can put a water bottle and a snack bag for the day, etc. 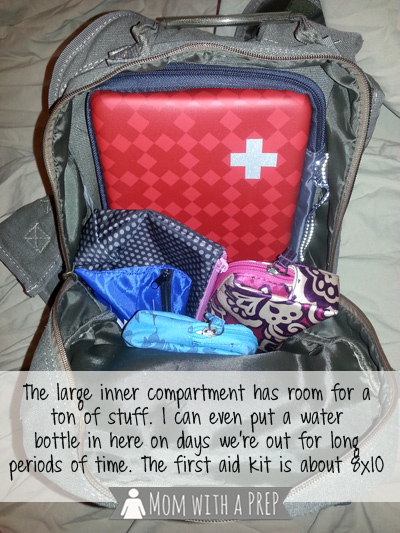 There is also a side access compartment that you can store an iPad or Kindle in, or other large flat object. You could also use this compartment to carry a weapon in if  you just didn’t have a way to body carry and you were licensed to conceal carry. But remember…this is a back-carry bag, so your weapon won’t be at your side for quick access. You would have to pull the bag around to reach in the compartment. But if you have no other way to carry, it’s a last-ditch option. 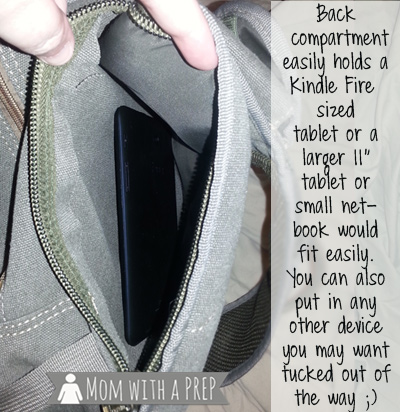 There is a quick grab handle on top to make it easy to pick up.

The hardware isn’t cheap, however, the clasp for the strap does not have teeth, so when you adjust the chest strap to carry over the shoulder (instead of cross the body sling-style), if the bag is weighted down heavily, it will eventually expand..leaving you to adjust again. I’ve not yet had the problem as I don’t keep the bag packed that heavily, but I can see it as an issue for some. (update: I’ve found using a heavy-duty binder clip works wonders to keep the strap in place if I need to carry it over my shoulder for whatever reason. If you’re of small stature and want to carry cross-body and the strap is too long, this is a good option for you, too, if you like the style of the bag otherwise).

The zippers aren’t heavy-duty metal zippers, but plastic ones. I haven’t had an issue with them at all, but there are reviews that say that the zippers have blown out.

I did find one sewing flaw in the webbing on the back of the shoulder strap area where a 1″ piece of the webbing wasn’t sewn under the trim, but it is still sewn down, so I’ll just trim it off to make sure it doesn’t catch.

While stylish, don’t confuse this with a military backpack. It’s not that heavy-duty, but I really like the way it looks, so far it’s worked well for my needs and I can actually get more things in it than my old day pack without it being so bulky as it’s designed to be a backpack style bag with room.

As far as fit. I am a big girl, and the pack just fits when I wear it as a sling. It is a little awkward to carry it on just my shoulder the way you can a backpack (but I’m built with sloping shoulders instead of squared ones, which makes shoulder carry hard for any bag for me), but I think that it will just interchange with my original daypack depending on my need for the day.

I’ll update again in a few months after I’ve had lots and lots of use of it, but so far, I’ve been really happy with it!

Purchase it here at Amazon.

Months and months later, I still use this bag constantly. One of the flaws reported with the design of the bag is that the zippers stop working. But I’ve found that the 2 times mine have separated, I just back up the zipper to the original position, and it realigns everything just fine, and it works like a charm! This has definitely turned out to be an awesome day bag for me, especially if we’re going to be out and about for long periods of time during the day. 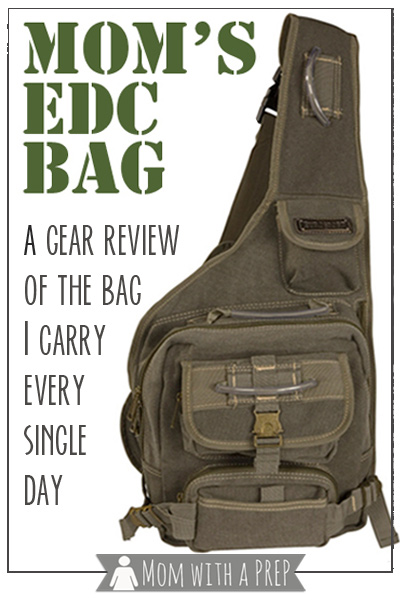