You are here: Home / Preparedness / I Tried It for You: A Review of Wise Freeze Dried Foods 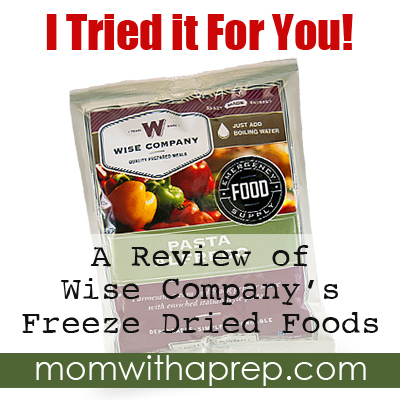 We’re relatively new to preparedness and have never wanted to be that family with 10 years of freeze dried foods taking up 3 rooms of their house. We want to be self-sustaining, but do realize that it isn’t realistic now. Having a few months of freeze dried foods would be really smart, just in case. We’ve eyeballed the food at local camping and supply stores, but either snickered that it had to be terrible or gasped at the huge expense.

However, when we found a Wise Company Entrée Only Grab and Go Food Kit, we thought it would be a great time to put a box aside and try it out if we wanted. The kit will provide two entrees for 4 adults for one week and costs $80. Considering it’s hard to feed a family of four for $80 a week we thought we would give it a go.

One weekend evening when we were all home, and no one wanted to cook, the thought grabbed us – let’s try out that food! It was easy enough to do – Put some boiling water in each envelope (after you removed the O2 package), sealed for 10-15 min while it rehydrates and warms is all it takes.

The only problem is that the food didn’t rehydrate at the same pace, so some took a good 20 min to be ready. No big deal, but it left us constantly guessing if it was going to be ready or not. Then we split up the servings so that everyone could have a taste.

Chili Mac – maybe because I’m from Texas and used to some good tex-mex, even in a chili mac, this was neither chili nor mac. In fact, there really wasn’t much of a taste at all except a vague tomato taste. I know that not everyone likes spicy, but ‘flavor’ would’ve been good.

(Read our review of the Mountain House Chili Mac here)

Pasta Alfredo & Chicken – was SUPER salty and overly powdered alfredo tasting and goopy, but The Sidekick, who doesn’t like most food, ate it all without complaint, it can’t be that bad. This probably could have used a little extra water to make the sauce not quite so thick.

Lasagna – I didn’t get a chance to eat this, so this is reviewed by Boy Wonder and Dad in Shining Armor.  A step up from canned spaghettios was the general consensus.

We tried a few of the other flavors and came upon the same thought – there really was no distinguishable flavor. They were pretty bland, very salty, and not something we’d WANT to eat everyday. I don’t know if the flavors of the meals were for the generic person who doesn’t like highly spiced foods, or if there is a reason that in stressful times, having flavor in your food is a bad thing? Here are the flavors we tried: Chili Mac, Lasagna, Chicken Alfredo, and a Beef Stroganoff kind of meal. I think we’re definitely going to have to give Mountain House  a try.

I Tried It For You! A Review of Mountain House Freeze-Dried Foods