You are here: Home / Creating Self-Reliant Kids / How to Get Emergency Lighting With Crayons 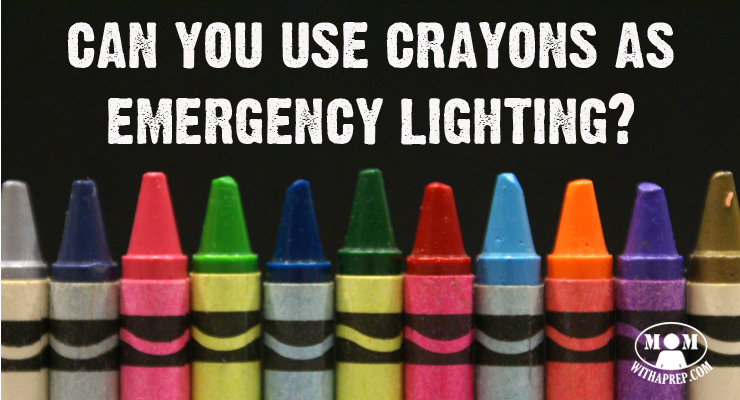 I’m sure you’ve all seen the emergency crayons light idea floating over Pinterest and Facebook at some point. We decided to test it out during one of our Preparedness Friday classes, and give you an idea of how it worked for us – and if it’s something you’d even want to do for you! 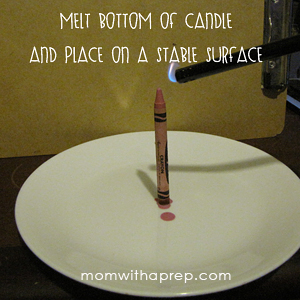 Instead, we should have just broken off the tip to get to the paper, but we didn’t. And it took a long while to finally get it to the point of lighting. (oh,..how much science we learned at this point!

Cool fact: Did you know that the ‘smoke’ coming off a blown out candle isn’t really smoke, but actually wax vapor cooling? seriously. 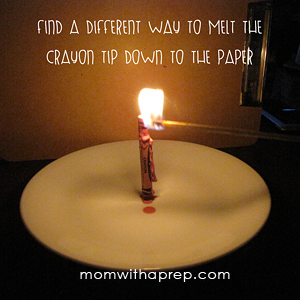 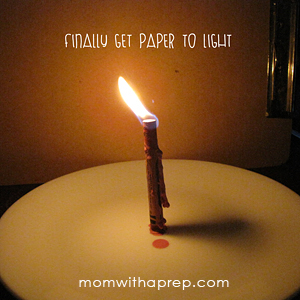 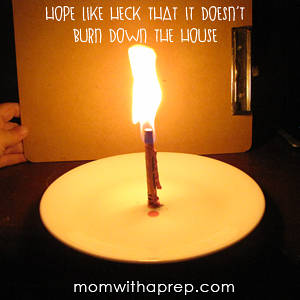 Do you really want to make emergency lighting from crayons?

Here’s the point when we began to say..hm…do we really want this? The flame continued to get bigger and more out of control the longer it burned down the length of the candle. Now, had I thought about it, I might have run to get the hurricane lamp glass to put over this to see if it helped. But I didn’t. Would it have helped? Probably, but it wouldn’t necessarily have been any more stable.

The single crayon did actually throw off a lot of light in our room when we turned off the lights and shut the curtains. But I didn’t feel safe with it at all.

Now..the other issue is..bundling a few of these together, lighting them and using them as a torch. It could work for short term. However, you’d have hot wax melting everywhere, including on your fingers. Not necessarily something I’d want to do, but if I was caught, alone, with no provisions in a preschool classroom, grabbing a bunch of crayons for some lighting might be the thing to do. Just use the safety scissors to cut off the tips to save yourself some time, and hope that the teacher smokes and had a lighter or matches tucked up in her desk somewhere to use to light them. 🙂

After our experience, this is not something we’d want to rely on, nor will it be something we throw into our preps as a tool. We do happen to have a box of crayons and a small coloring book for someone in our secondary emergency box that we’d grab if we have time or room that has some gear that would be awesome to have but that is not necessary. Then we’d have a back up. But I don’t feel this is a safe way to light up a room at all.